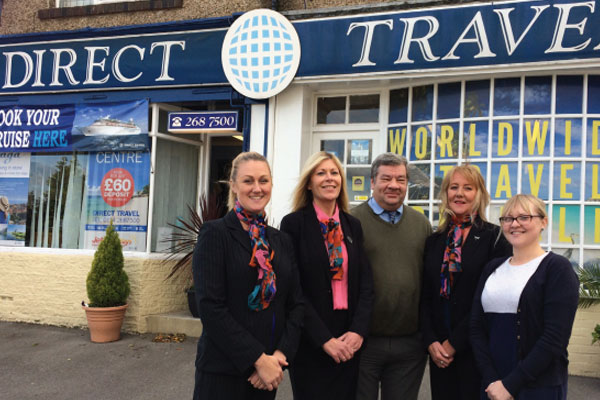 Ben Ireland went back to his home city of Sheffield to visit a high street agency that focuses on the traditional values of a local travel agent.

There are three flags hanging outside Direct Travel. One is that of the United States, another Australia and the third South Africa.

Can you guess the agency’s top-selling destinations? The most popular holidays sold by the agency, which opened in 1996, are tailor-made long-haul itineraries that are difficult to put together.

But as a long-standing, traditional travel agent, the shop will sell any destination, “as long as it’s right for the customer”, says managing director Paul Rushby. “I used to have a saying that I had more seats to Sydney than Spain,” he told Travel Weekly. “I’m not sure if that’s strictly true anymore but we’ve been a long-haul specialist for years.”

Direct Travel has definitely moved with the market. They’ll happily sell a two-week all-inclusive package to the Western Med – Jet2holidays is popular – but also appreciate that customers are savvy enough to go direct.

They know where the value is. And whether that’s helping a reliable client’s 18-year-old book their first foreign holiday or put together a once-in-a-lifetime American rail or road trip, it will be tailor-made to the customer’s personal requirements.

“You have to be a sponge to absorb what they are looking for,” said Rushby. “Then use your knowledge to book them a personalised trip that fits their needs.”

Attention to detail has helped him keep his customers coming back, and Rushby was confident in his “huge repeat business”, which includes three generations of some families. He added: “I’m not very good at a lot of things, but I’m very good at remembering names. You have to make the customer feel really special to keep them coming back.”

The agency’s diversity of product knowledge stems from its staff’s experience in the industry and their collective travel footprint, which the bubbly team shares with each other. “Between us we’ve travelled extensively,” Rushby said. Branch manager Emma Cullen added: “I sometimes feel like I’ve been to New Zealand because of how well I know the place.”

Always on the lookout for developing markets and broadening its portfolio, The Travel Trust Association member joined Clia in 2016 with a “growing” cruise sector accounting for just under 10% of business. Rushby is also keeping a close eye on the development of the Association of Touring & Adventure Suppliers as adventure and the thirst for touring holidays continues to increase. Domestic travel through operators such as Shearings, Robinsons and Alpha also remain popular.

Although it’s primarily a leisure agency, bookings from business travel clients now make up 20% of sales. Companies include one of the few remaining steel firms in Sheffield, a city synonymous with the alloy, as well as a professional cycling team. “We had to get some of them to Oslo – all from different places – and then on to France a week later, with their bikes,” said Paul. “It was very complicated, but very interesting.”

Ties with local companies are one thing, but being the community’s local travel agent is the main job. Direct Travel has had Travel 2’s Maui campervans parked outside, which attracted extra footfall, and attends local community fares and street parties.

Cullen said: “Everyone knows Paul. People will just pop in for a chat, and they’ll always book their holiday with him.”

Paul added: “We don’t get many customers popping in for information and booking elsewhere, because we always give them a really good service.”

I’ve been here for… four years. I was the manager of the local Co-Op Travel and worked there for 21 years before it shut down.

My specialist destinations are… the Indian Ocean destinations such as Mauritius and the Maldives. I prefer selling long-haul to short-haul.

A customer once asked me… if I could get their cello to Germany for a music concert. I had to book an extra seat under the name ‘X Cello’. It didn’t need a passport.

I’ve been here for… seven years. Before that I worked in Apollo Travel’s call centre in Rotherham and am a qualified graphic designer.

My specialist destinations are… anywhere you can ski, which could be the Alps, Canada and Bulgaria now.

I got into travel because… I went travelling and got the bug. I also worked in Turkey and the French Alps, but not as a rep. I worked behind the scenes in ‘operations’ making sure things went smoothly in resort.

Standing out in a commanding position overlooking the Sheffield suburb of Crosspool, Direct Travel – and owner Paul Rushby – appear to watch over the local area, which is awash with small, independent businesses in various industries.

The fact that so many customers are repeat bookers, or referrals from friends and family, goes to show the care taken to put together the perfect bespoke holiday for their customers. It’s a real old-school travel agency which, although dipping its toes into social media marketing, does not stray from traditional sales values like the art of conversation and listening to what the customer wants.

Some might say the agencies that are prospering are those that jump on the technology bandwagon, but Direct Travel is an example that old-fashioned service still works. The fact that follow-ups are often made when customers pop in to say hello – rather than via email – proves that. Direct is perhaps the perfect word, as this no-nonsense agency makes sure its customers get what they want, in typical Yorkshire fashion, with no fuss.