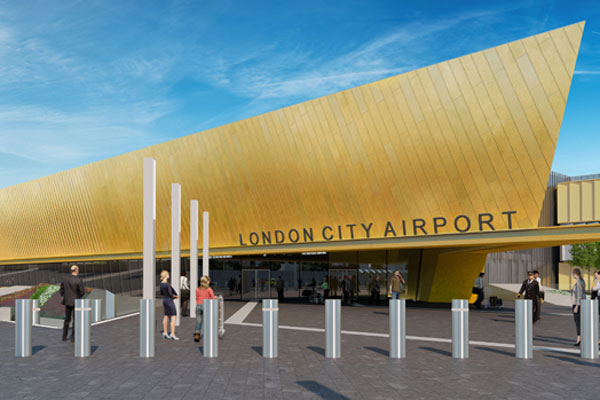 London City Airport has released new imagery of what it will look like after a £400 million redevelopment to mark its 30th anniversary.

The work at the east London airport is being privately funded and is due for completion in 2021.

The improvements will enable two million more passengers per year to use the airport by 2025 and add 30,000 additional flights per year, creating over 2,000 jobs and generating an additional £750 million per year for the UK economy, the airport said.

it is also constructing the UK’s first digital air traffic control tower that is due to be operational in 2019.

Declan Collier, chief executive of London City Airport, said: “Over the past 30 years, London City Airport has become an intrinsic part of London’s transport system; growing responsibly to a record-breaking 4.6 million annual passengers in 2016, creating local employment, and connecting business and leisure travellers with the UK, Europe and beyond.

“As we celebrate this anniversary, we look to a bright future ahead and the world-class transformation which is soon to commence.

“The City Airport Development Programme presents the opportunity to create an airport of the future, which will help meet demand in the London market, and increase connectivity.”

On October 26 1987, a flight carrying around 40 passengers touched down from Plymouth in East London, on the peninsula between Royal Albert Dock and King George V Dock.

It was the first commercial flight to land at London City Airport. The first arrival, operated by Brymon Airways, was followed by a Eurocity Express service from Brussels, both using De Havilland Dash 7 aircraft.

At the time, London City Airport was the first completely new airport to be built in the UK for 40 years, taking just 18 months to construct at a cost of £34 million.

It has subsequently increased its routes to 50 destinations today, across 12 airlines, serving a combined total of over 55.5 million passengers since 1987.

To coincide with the 30 year milestone, the airport has released updated images by architects Pascall + Watson, which show what the airport will look like after it undergoes the £400 million City Airport Development Programme (CADP).

The seven artist’s impressions include several exterior views of an expanded airport, including the passenger terminal which will increase in size by around 40,000m².

Enabling works are under way, with construction beginning early in 2018, with the delivery partner Bechtel.