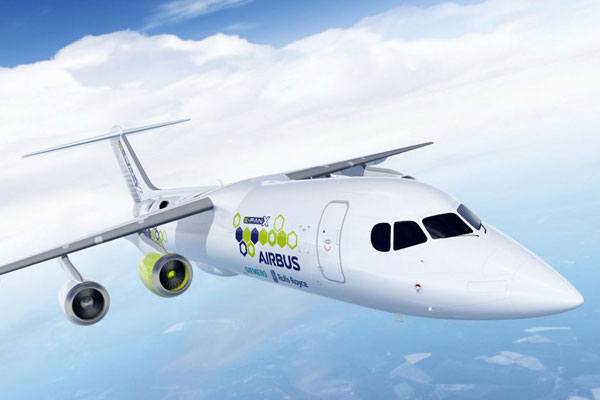 Hybrid electric engine aircraft technology is to be developed in a collaboration between Airbus, Rolls-Royce and Siemens.

The E-Fan X programme will first put an electric engine alongside three jet engines on an 80-seat BAe 146 aircraft.

The firms want to fly a demonstrator version of the aircraft by 2020, with commercial flights by 2025.

Each of the partners will be investing tens of millions of pounds in the project.

The firms are developing hybrid technology because fully electric commercial flights are currently out of reach, a spokeswoman said.

The weight of batteries coupled with the weight of equipment to cool electric engines are two limiting factors at present, she said.

“We see hybrid-electric propulsion as a compelling technology for the future of aviation,” said Airbus chief technology officer Paul Eremenko.

“The E-Fan X is an important next step in our goal of making electric flight a reality in the foreseeable future.”

Rolls-Royce will be providing the electricity generator at the back of the E-Fan X aircraft.

The turbine powering the generator will run on jet fuel and provide power for the electric engine.

Any excess power from the generator will be stored in banks of batteries in the fore and aft holds with the stored energy to be used during take-off and landing.

A Rolls Royce spokesman told the BBC that the company wanted to make the turbine as light as possible, and that “parts of the engine, generator and power electronic systems will be integrated to reduce weight”.

The European Commission wants a reduction of carbon dioxide emissions by 60%, it wants nitrogen oxide pollution down by 90%, and noise reduction of 75% as part of its Flightpath 2050 plan.