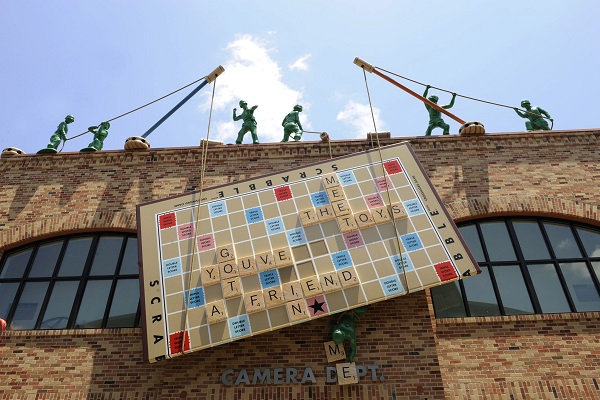 Guests visiting the ten-acre land will be made to feel like they have been shrunk to the size of a green toy soldier, like those seen in the classic Pixar film series.

It will be set in Woody and Buzz’s owner Andy’s back yard, with the surroundings “enormous” and characters from the film scattered around.

Details of Toy Story Land’s two main attractions were revealed. The Slinky Dog Dash will be an 18-seat rollercoaster ride and Alien Swirling Saucers, featuring the little three-eyed, green alien toys from the claw machine at Pizza Planet, will be a “modern day teacup ride”. Both are described by Disney as “high energy” family rides.

The new land, at Disney’s Hollywood Studios, has been under construction for three years.

It will also be home to a ‘quick service’ restaurant called Woody’s Lunch Box made to look like Andy’s Tupperware lunch box his mother packs for him to take to school, serving meals and old-fashioned soda floats.

Giant versions of characters such as Woody, Buzz Lightyear, Jessie and Rex will be on hand to welcome guests into the park.

The new land’s 2018 opening will be followed in 2019 by the opening of the 14-acre Star Wars: Galaxy’s Edge, which is also under construction at the park.