Can a foodie holiday satisfy clients who don’t eat everything on the menu? Katie McGonagle finds out.

If the way to a man’s heart is through his stomach, the way to the heart of a destination seems to be much the same. Eating out in local restaurants, trying traditional foods for the first time, or even discovering a liking for a local tipple – the taste buds are like a direct line to what makes a destination tick.

So imagine not being able to take part in all the fun. While foodie holidays have been on the rise among most travellers, those with any kind of restriction on their diet are at risk of being left behind.

That’s because although the foodie landscape has transformed at home – supermarket shelves are stocked with gluten-free this or lactose-free that, and quinoa or kale smoothies have become the norm – that’s not always the case around the world.

How many vegetarians can tell tales of being served nothing but a plate of vegetables or having people assume they still eat fish? And for those on a vegan, gluten-free or sugar-free regime, the finer details are even more likely to get lost in translation.

To help clients get the best out of a gourmet escape, we look at which destinations and suppliers go out of their way to cater for those with particular dietary needs, so they get a great holiday while you dine out on the success. 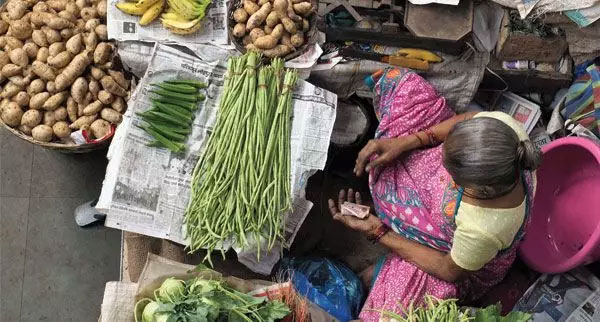 Some countries are better set up for non-meat-eaters than others, so the choice of destination is all-important. Going veggie in the likes of France, China or Argentina is certainly doable, but be prepared for a few bewildered looks when you explain you don’t eat meat.

Head to India, however, and the array of dishes based on chickpeas, lentils, pulses and other vegetarian proteins mean clients will have no trouble finding enough options.

“Going veggie in the likes of France, China or Argentina is certainly doable, but be prepared for a few bewildered looks when you explain you don’t eat meat.”

That’s a key reason why On The Go Tours tipped India as one of its hottest destinations this year, anticipating a rise in ‘veggie travel’. Marketing manager Philippa George says: “India is a great choice for vegetarians. With around 500 million resident vegetarians, it is a well-understood concept. As a country, it has a low meat consumption, and restaurants have a wealth of vegetarian options, which leave the label of boring and bland at the door.”

Similarly, Intrepid Travel steers clients towards destinations that best suit their dietary needs. Cara Brown, food and brand product manager, says: “If the enquiry is for a vegetarian and they are looking at a Spain or Peru trip, we would suggest changing to a trip in Taiwan, India or Sri Lanka, as there is a lot more variety in foodie options. Some destinations’ local culture and culinary traditions are just better equipped to deal with certain dietary requirements or preferences.” 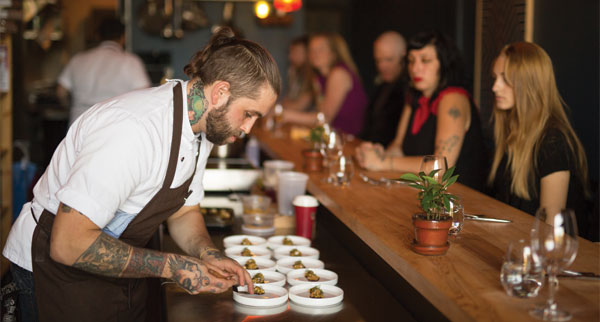 While vegans will need to watch out for ghee or other animal products in India, the Far East can offer more options thanks to a relative lack of dairy-based dishes – which also make them well suited to those with lactose intolerance – as meat-free dishes are less likely to rely on cheese as their main ingredient.

Cultural traditions have also given Israeli city Tel Aviv a vegan-friendly air. Kosher dietary laws mean meat and milk can’t be mixed, so many classic dishes, sauces and sides – think steaming-hot falafel or creamy hummus, for example – tend to be free of both. Tel Aviv alone has more than 400 vegan kitchens, and online guides such as vegansontop.co.il or tourist board website new.goisrael.com offer tips on the best vegan eateries.

“The classic American corndog gets a modern twist at Fox & Son Fancy Corndogs, where gluten-free, vegetarian and vegan-friendly varieties are also on the menu.”

There’s no need to miss out on the current rage for street-food tours or artisan markets either – in fact, many smaller producers cater well to this sector. In Philadelphia’s Reading Terminal Market, for example, the classic American corndog gets a modern twist at Fox & Son Fancy Corndogs, where gluten-free, vegetarian and vegan-friendly varieties are also on the menu. And in Portland – regularly tipped as a go-to vegan destination and home to the world’s first vegan mini-mall – options range from vegan doughnut shop Doe Donuts and pizza place Virtuous Pie, where pizzas are made using nut-based cheeses, to the all-gluten-free Back to Eden Bakery. 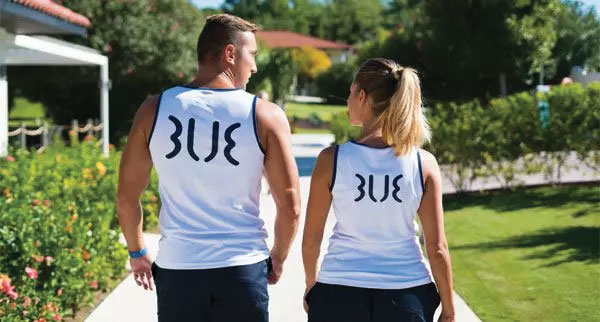 It seems to be de rigueur for new hotels – albeit more at the luxury end of the market, where wellness retreats abound – to have options for vegetarians, vegans, gluten or sugar-free diets.

Daios Cove in Crete has added a gluten and dairy-free buffet at international restaurant Pangea, with options promising to be every bit as creative as the rest of the menu. Luxury brand Six Senses, meanwhile, is rolling out the Eat with Six Senses programme across the group, featuring healthy menus that do not use lactose, gluten, sugar or flavour enhancers.

“Guests pick their own produce from the on-site organic garden, then cook it alongside the resort chef, before sitting down to enjoy it in the 12-person restaurant.”

With its reputation for wellness retreats firmly established, it’s no surprise the BodyHoliday in Saint Lucia is getting in on the act, with a new restaurant I-tal that serves only plant-based cuisine. Guests pick their own produce from the on-site organic garden, then cook it alongside the resort chef, before sitting down to enjoy it in the 12-person restaurant amid the resort gardens.

While luxury retreats have certainly set the trend, mainstream brands targeting a younger, more health-conscious audience are also getting in on the act. Tui Blue was set up to focus on fitness, wellness and nutrition across its seven European resorts, serving vegan, vegetarian, low-carb and gluten-free meals with a local twist. Guests also get a free weekly nutrition session, and can sign up to individual nutrition coaching and personal training. 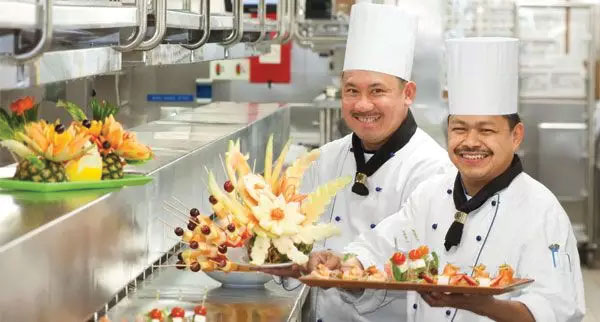 If there’s one thing cruise is known for, it’s food. From elaborate breakfast buffets to gut-busting five-course dinners – with elevenses, lunch and afternoon tea in between – dining is a central part of the experience.

Luckily, cruise lines have responded accordingly, with many going beyond the basic requirements. Celebrity Cruises has a 14-day rotating menu of vegetarian options in its main and speciality dining areas, and all dishes can be modified for vegans.

Hapag-Lloyd Cruises has taken this a step further by expanding its vegetarian menu on Europa 2 last year to include more than 80 dishes, under the direction of chef Michael Hoffmann, who specialises in vegetarian cuisine at his Michelin-starred Margaux restaurant in Berlin.

“From elaborate breakfast buffets to gut-busting five-course dinners – with elevenses, lunch and afternoon tea in between – dining is a central part of the experience.”

Oceania Cruises has likewise taken speciality options to heart, introducing a much-expanded vegan menu last year. Bernard Carter, senior vice-president and managing director for the EMEA region, says: “As part of our constant drive to improve and offer even more choice, we introduced the most expansive vegan menu at sea, allowing our vegetarian and vegan guests to immerse themselves in the same way as guests dining from our regular menus. I am impressed that, as an industry, we are becoming ever more aware of the differing needs of our clientele. At Oceania Cruises, we are already seeing an uplift in travel agents enquiring about a variety of dietary needs.”

The expanded options, which are available across the fleet, include cold-pressed raw juice and vegan smoothie bars, and more than 250 dishes in total, such as vegan tortilla espanola at breakfast, Tuscan-style bean soup for lunch, and Thai red vegan curry at dinner.

These aren’t the only dietary restrictions agents need to be aware of – many lines can cater to halal or kosher diets, but often require at least 90 days’ notice prior to sailing. At Crystal Cruises, for example, kosher foods and wines are available, and staff have been trained to ensure only kosher pots and utensils are used, and that plates and glassware are washed separately.

“AmaWaterways can cater for gluten-free diets not only at mealtimes, but also in its main lounge snack bar and pre-dinner hors d’oeuvres.”

Crystal Cruises can also cater to diabetic and low-sodium diets, and given the relatively older clientele of cruise lines, it’s worth knowing these options are available should your clients need them. At Carnival, the range extends to low-cholesterol, low-fat, low-carb, low-sugar and gluten-free diets, with gluten-free pizzas, pasta, sandwiches and cakes available.

And if there’s one area that’s expanded exponentially over the past few years, it’s this. From the rivers – where AmaWaterways can cater for gluten-free diets not only at mealtimes, but also in its main lounge snack bar and pre-dinner hors d’oeuvres – to the ocean, where MSC Cruises offers gluten-free meals in its main restaurants, beers and cocktails in its bars, and even a gluten-free lunchbox on excursions.

As with most of these options, the key is communicating with the supplier well in advance of travel to ensure a client’s requirements are catered for, so all they have to do is say ‘bon appetit’.

Q&A with Ori Shavit, food writer at Vegans On Top
Must-try dishes from around the world
The best foodie experiences in the Middle East