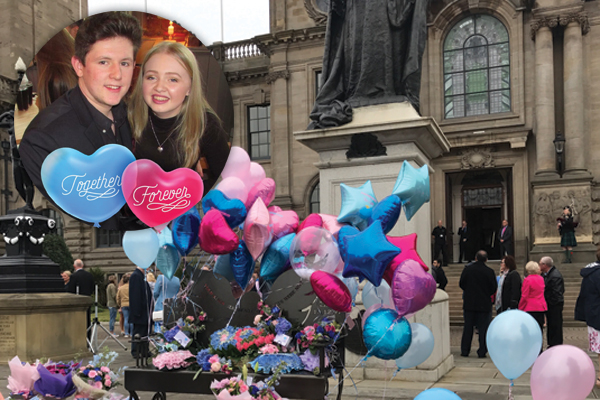 South Shields turned blue and pink in memory of travel agent apprentice Chloe Rutherford and her boyfriend Liam who lost their lives in the bomb attack at Manchester Arena a year ago.

The agency where Chloe worked, Westoe Travel, was among more than 5,000 South Shields businesses, schools and individuals that paid tribute to the couple by dressing its window in the colours of the Chloe and Liam Together Forever Trust.

The trust has raised more than £100,000 in the couple’s memory to help other local young people pursue their dreams in sport, music and drama.
Staff at the agency also donned blue and pink in honour of Chloe, 17, and Liam, 19, who were two of 22 victims who lost their lives in the attack.

Westoe Travel owner Graeme Brett, treasurer of the Together Forever Trust, said the town had paid a moving tribute outside South Shields Town Hall, which was lit up pink and blue and flew a flag for Chloe and Liam.

The agency closed so staff could attend the event, where a minute’s silence was held and tributes were paid in front of hundreds of friends, families, local residents and emergency services staff.

Brett said: “Their deaths have affected the whole community and the families’ decision to set up the Together Forever Trust is inspirational. Chloe loved her music and performing and Liam was really good at cricket.”

Chloe was an apprentice at Westoe Travel and had been due to start full-time in June last year.

He added: “It’s been a very emotional day for the staff. For us it’s about trying to be positive, remembering and celebrating their love and happiness, and supporting others to achieve their ambitions. Chloe would go and watch Liam play cricket – you must love someone to do that.”