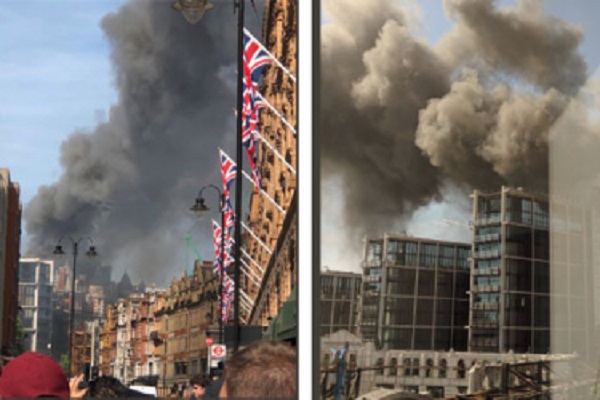 A huge fire has broken out at the Mandarin Oriental hotel in Knightsbridge, central London, with nearly 100 firefighters called to the scene.

The five-star 189-bed property in William Street had just completed an £85m renovation.

Knightsbridge has been closed between Sloane Street and Grosvenor Place. There are no reports of any injuries, the fire service said.

In a statement, London Fire Brigade said: “Fifteen fire engines and 97 firefighters and officers have been called to a visible fire in William Street, in Knightsbridge.

“The brigade’s 999 control officers have taken more than 35 calls to the fire, which is producing a lot of smoke.

“The brigade was called at 3.55pm. Fire crews from Chelsea, Kensington, Hammersmith, Battersea and other surrounding fire stations are at the scene.

“The cause of the fire is not known at this stage.”

Nearby hotels, including the Capital, are offering support to Mandarin Oriental guests and staff.

Mandarin Oriental Hotel Group, a member of the Jardine Matheson Group, currently operates 31 hotels and eight residences in 21 countries. It has operated its London hotel since 1996, when it acquired what was then known as the Hyde Park hotel from Forte. It later closed the hotel to undergo a £57m restoration, reopening in 2000.

The hotel’s most recent renovation, completed earlier this year, was the most extensive in its 115-year history and incorporated all guest rooms, suites and public areas as well as the hotel’s spa.