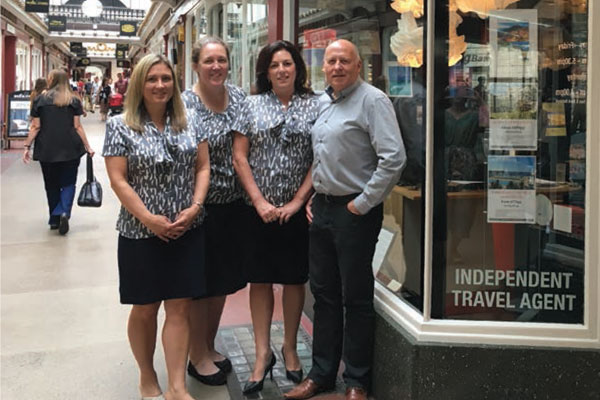 Carolyn Park set up her first agency after five years in travel and now has three branches. Juliet Dennis visited the team in Bath.

For someone who dropped out of school during her A Levels with no idea what career to pursue, Carolyn Park hasn’t done badly.

After stints as a pub chef and equestrian centre manager, Park turned to travel, and eight years ago, after five years at Cheltenham-based Tailor Made Travel,
she set up C The World from her garden shed.

The agency now has 13 staff across three branches in Bristol, Thornbury (recently relocated from Easter Compton, Gloucestershire) and Bath. The Bath branch sits in one of the city’s oldest shopping arcades, The Corridor, dating back to 1825. It opened in September 2016.

Park likes to have a project on the go. “I’m terrible if I don’t have one,” she said.
So she wasn’t fazed when the Bath shop was in a state of disrepair when she bought it.

The former opticians, left empty for several years, had a hatch in the floor and a ladder that led to a dark cellar.

Within three months, the shop’s interior had undergone a major transformation into a contemporary-looking agency with a new staircase to the cellar, which had been transformed into a mock aircraft cabin with a fully stocked bar.

“I wanted somewhere special for clients and didn’t want to cut corners,” said Park, who uses the space to entertain potential clients and hand out tickets as well as for training members of the C The World team.

Each agency has similar quirky touches, the latest of which will be a 16-seat cinema in Thornbury.

Park says staff and independence are the key to her agency’s success.

“I still spend 60% of my day with clients and some only buy from me,” she said.

“But because of the way we have the business set up, it almost manages itself.

There is no hierarchy or managers – we all get along and get on with the job. I’m very lucky. Our offices talk to each other; we pool knowledge.”

Each C The World’s branch has a slightly different sales mix, with the Bath branch enjoying strong sales of cruises and escorted tours.

“We hardly ever sell US holidays at Bath. In Bristol we do a lot of South America and from Thornbury we sell a lot of Africa and New Zealand and more family holidays,” added Park.

The mantra is to sell holidays that best suit clients – if operators are not on the contracted list run by Freedom Travel Group, which the agency is a member of, she asks if they can be added. The agency is also an Aito (Association of Independent Tour Operators) agent, with Park on her second two-year stint on the panel.

“We work with lovely niche operators,” she said. “It’s about matching the right client to the right holiday and making sure they come back to us. The guys have carte blanche to book any operator they like.”

Park’s current project is to set up trade-only golf specialist operator Tee The World with her partner, fellow golfer and C The World’s consultant Tim.

It is poised to launch in September, with C The World the first partner for flight consolidator Aviate, which acts as the principal, in a new venture to help retailers set up their own specialist tour operators.

Holidays in Europe, the Caribbean, Africa and the Middle East will be offered and Park may even employ one or two sales executives to visit agents.

“We will offer straight golf holidays and others that just include a few rounds and stays at boutique hotels near courses,” she said.

The hope is that there is a gap in the market for a B2B golf specialist. “I have spoken to agents who say they have shied away from promoting golf because there isn’t a trade-only golf operator,” she explained.

In between developing Tee The World, Park has had to deal with changes in credit card payment charges, GDPR and new Package Travel Regulations.

She said: “This year has been hard. There has been a lot of legislative changes, but in terms of trading we are up; we had a stonking June.”

She also has a novel solution for GDPR – a special, sealed ‘GDPR bin’ where staff put paper waste that is shredded and removed by the company’s stationery supplier, while data on the agency’s computer system is saved and encrypted.

The result is a paper-free office.

Park added: “At the end of the day a lot of it is common sense.”

Juliet’s day at C The World

The first thing I noticed when I walked into C The World was its calm and friendly atmosphere.

Director Carolyn Park’s unflappable nature no doubt helps, not to mention that staff get on so well.

The cosy agency has been well-designed with a modern look and feel, from its polished wooden floors to its unusual lampshades.

And then I went downstairs…the cellar has been kitted out to feel like the inside of an aircraft cabin. The pièce de résistance is a fully-stocked bar, although I had to say no to an alcoholic drink at 11am and opted for a nice cuppa instead.

The blue light of the “cabin” windows makes it feel like you really are in a first class aircraft cabin – a lovely touch.

Nothing was too much trouble for this team. So when I left my notepad behind, Steve quickly located it and kept it safe until I could dash back to pick it up.

I get the distinct impression that customers feel like they are in safe hands at C The World.

I’ve worked for C The World in Bath since…it opened two years ago. I came from the former World Market Travel in Bath, where I started in 1983.

What I love about my job is…that every day is different. Yesterday I booked a Shearings coach tour to Whitby and today I am doing a Sea Cloud booking. I still get a buzz.

When I was younger I wanted to be….a travel agent. I was stamping brochures at 14.

I’ve worked here since…it opened. I came with Julie from World Market Travel, and I’ve been in travel for 30 years.

What I love about my job is…the variety. It’s not often I wake up and don’t want to come to work. A lot of clients have also become close friends.

When I was younger I wanted to be…a travel agent. My dad was an agent and I never thought of doing anything else.

I’ve worked here since…December, and before that I worked at another agency for 20 years.

What I love about my job is…getting my teeth into a good booking and the fact that you never know what your next enquiry might be.

When I was younger…I was offered a job in a chemical plant, testing chemicals, but I turned it down to go into travel and I haven’t looked back since.