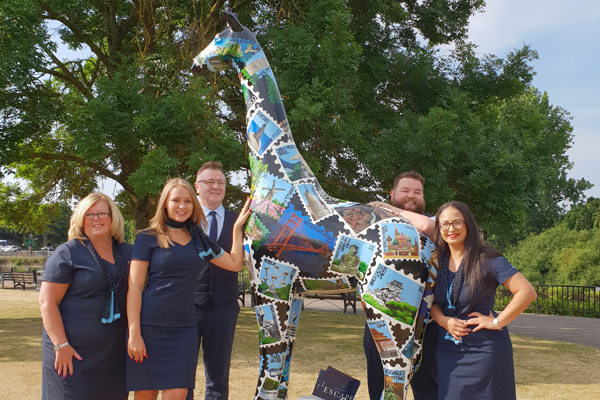 A travel agency which opened in January has thrown its weight behind a giraffe-themed city-wide fundraising effort to support a local hospice.

ArrangeMy escape in Worcester has sponsored a giraffe sculpture since July to raise money for St Richard’s Hospice, a centre that offers free palliative and end-of-life care.

Simon Scott, ArrangeMy escape’s chief executive officer, volunteers at the hospice in the city each week.

The hospice is looking to fund an extension with money raised by businesses sponsoring the 57 giraffe sculptures dotted around the city as part of a campaign called Worcester Stands Tall, money from which will be sent to the Build 2020 St Richard’s Hospice appeal

ArrangeMy escape’s branch has raised money by selling maps showing where all the sculptures had been erected around the city and cuddly giraffe toys.

Jennifer Lynch, the branch’s general manager, said: “For ten weeks this summer, Worcester’s streets, parks and open spaces are being brought to life by giant giraffes and giraffe calves.

“Each one is individually designed and crafted to stand tall within the city.”

She believes the branch has raised in excess of £100 but said that figure could be much higher once all the money has been counted after the ten-week campaign comes to an end on September 16.

Lynch said: “We’re doing weekly offers related to that country and it has been quite successful – much more than I thought it would be.

“St Richard’s Hospice is very supportive of the businesses that are sponsoring the appeal.”