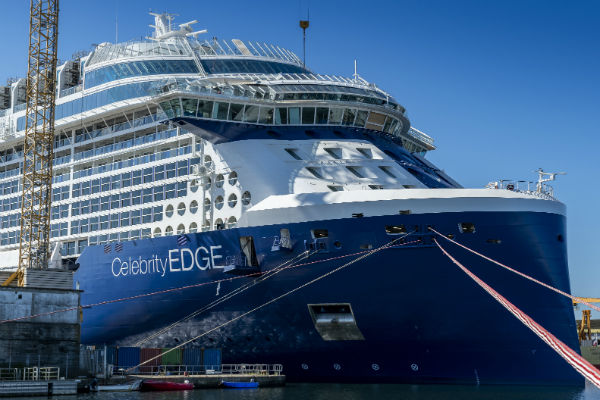 Scroll down for videos

The strength of the British market coupled with the persistence of the Celebrity UK team, persuaded the Royal Caribbean Cruises’ chairman to deploy Apex in Southampton.

Richard Fain called Jo Rzymowska, Celebrity Cruises’ vice president and managing director in the UK & Ireland, a “passionate fighter” in the way she pushed for the second Edge-class ship to come to the UK.

He also hailed the UK market, adding that Britons had been very receptive of Celebrity Edge, the first ship in its class, after it went on sale nearly a year ago.

Explaining the decision to offer a series of mini ex-UK sailings on Apex after the vessel’s christening in Southampton in 2020, he said: “The UK market is a very sophisticated market that appreciates quality if you have the product to satisfy demand.

“We think this [Edge-class] product is so perfectly designed to meet the high expectations of the British public that Apex will have no trouble at all.

“We have never had a situation where the market is so receptive, and we have a product that suits that market so well.”

Fain added that Celebrity Edge was of such high quality, in terms of its design, it would do well in any market.

Rzymowska revealed the UK and Irish market was not only the strongest behind the US, but it was “increasing year on year”.

“Because of that strength we had a discussion about where we put the second [Edge-class] vessel,” she said, speaking from the Celebrity Edge’s floating platform, the Magic Carpet.

“The Edge sales made [Celebrity Cruises’ president and chief executive] Lisa Lutoff Perlo and Richard Fain confident about putting Apex in the UK.”

Fain said: “Getting more per cent more efficient is a big deal.”

The parabolic ultra-bow of the ship, which is 95.5% complete, is designed to slice more efficiently through the water and makes little or no noise underwater.

“There are some questions about whether this is helpful for sea life,” Fain said.

More: Video: Celebrity Cruises to christen next ship in UK

Celebrity Cruises to invite 200 agents on Festival of Edge sailing