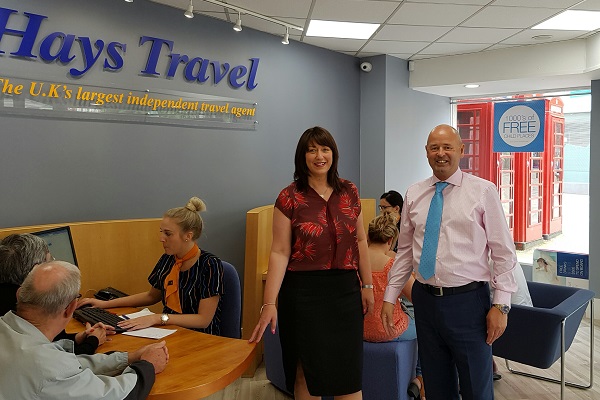 Fast-growing agency chain Hays North West has plans in place to open nine more shops by spring 2019 and has set its sights on 50 branches.

The agency, which has been 40% owned by Hays Travel since 2015, currently has 31 shops. It had 14 when Hays Travel bought the company, then known as Just Go.

Managing director Don Bircham told Travel Weekly that he expects to open nine more shops by spring next year, taking the total to 40 with an investment of more than £630,000.

The openings will see the chain lay down a marker in the Greater Manchester area, with sites earmarked in Rochdale, Didsbury, Ashton-under-Lyne, Cheadle and Oldham as well as Northwich, Runcorn and Macclesfield in Cheshire and Formby in Merseyside.

Around five or six agents will be employed at each agency, and recruitment is underway – as are plans to refurbish every single Hays Travel North West shop by summer 2019 to “breath fresh life” into the units.

Two new regional manager roles have also been created. Simone Murphy and Toni Smith have been promoted from their roles as branch managers in Wrexham and Bolton respectively, and will report into sales director Lindsey Barber.

Bircham said: “The brand is really well-known in Merseyside and north Wales, but less so as we move towards Manchester. But we are very optimistic and we have had applications from agents at both multiples and independents.”

The agency will have around 250 sales staff when the shops are opened by spring. It employed 75 in 2015.

Bircham said he expects the expansion to continue to the 50 mark, which he said would make Hays North West the second largest independent travel agency chain in the UK, after Hays Travel.

Towns and cities where Co-Operative Travel shops have been closed following the end of the joint venture with Thomas Cook are often targets for the agency, Bircham – who was previously retail operations manager for The Co-Operative Travel, explained.

“Assuming trading remains strong I’m pretty confident we will get to 50,” he said. “If they stopped being successful then we would have to take a step back and slow down, but because they have been successful it gives us the courage to open more.

“We are taking on the old Co-Op footprint, and taking those opportunities where towns want an independent travel agent.”

Webinar: Learn all about Magic Costa Blanca Hotels & Apartments and you could win a stay! Tune in on Thursday October 11 at 3pm
Click here to sign up