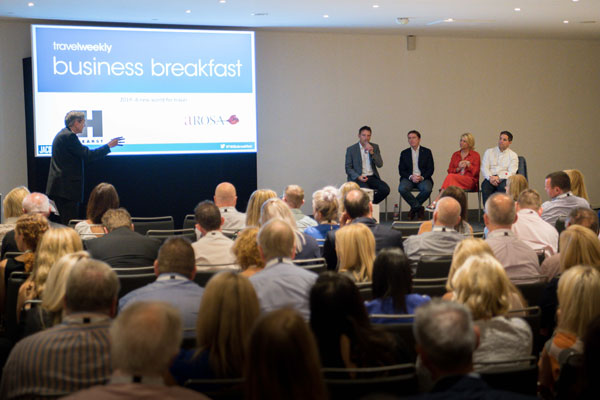 Brexit and climate change have been highlighted by travel industry leaders as the issues of most concern moving into 2019.

Uncertainty surrounding the UK’s exit from the European Union in less than six months time is creating consumer nervousness while travel companies are having to consider new destinations in an attempt to shift holidaymakers away from saturated hotspots getting overwhelmed by over-tourism.

The concerns were among a wide list of issues ranging from regulation, distribution and pricing through to sexual harassment debated at a Travel Weekly Business Breakfast on the first day of the Abta Travel Convention in Seville.

Hawke voiced deep concern over the issue while Sofer suggested demand for mainstream package holidays was unlikely to heavily impacted.

But Advantage Travel Partnership commercial and membership director Paula Lacey admitted agents were seeing uncertainty among customers following a tough first half of the year due to the summer heatwave and World Cup.

The briefing heard that one unnamed agent was telling people not to book holidays in the two weeks immediately prior to and after next year’s Brexit date at the end of March.

Lacey stressed that Advantage members would never suggest not booking but admitted: “There is a nervousness out there.”

The views emerged as new Abta research revealed that consumers are “confused and concerned” about how Brexit will impact their travel plans.

Referring to impending Brexit deadline, Hawke said: “It is two years is since the vote and less than six months to go and no-one knows what’s going to happen. It’s an appalling state of affairs and is impacting on UK travellers’ propensity to book overseas holidays.”

The slump in the value of the pound against the euro as a result was also having a significant impact on selling prices with Avalon river cruise rates for 2019 about double the level seen in 2016.

He suggested that the top and bottom end of the market were continuing to do well but those operating in the middle ground were finding conditions more challenging.

Sofer conceded that there were some foreign exchange issues for Tui but said he was not as pessimistic as Hawke, warning that the impact of Brexit can be over-hyped.

“People look for a trusted operator in uncertain times,” he said, pointing out that capacity growth of up to seven per cent for next summer was being underpinned by growth in interest in packages to countries such as Turkey and Greece.

“We are growing in all those areas and seeing demand coming from customers,” Sofer added.

Rhys Griffiths, partner and head of the travel group at law firm Fieldfisher, agreed that there continued to be nervousness over the possible impact of Brexit but said: “Whatever happens, people will still go on holiday.”