“You can pet the crocodile, but don’t stand too near its head or it will feel threatened,” warns our guide.

I’m stroking the scaly back of one of the world’s deadliest creatures as it quietly suns itself on the banks of the Kachikally Crocodile Pool, one of The Gambia’s must-see wildlife hotspots.

Tucked away within a labyrinth of bumpy residential roads in Bakau, the murky pond is home to about 100 Nile crocodiles, which are so well fed that they apparently have no interest in eating tourists.

Even though the 2m-long toothy reptiles seem docile, signs in multiple languages around the pool – ‘Don’t touch a crocodile without the advice of a guide’, says one – remind visitors that these are fearsome creatures. Sage advice, no doubt, but the croc-handler reassures me that no one has ever been attacked here.

“Enjoying such a close encounter with a croc is a once-in-a-lifetime experience that leaves me feeling like Crocodile Dundee.”

As well as being a hit with croc-loving tourists, the sacred pool is also popular with local women, who believe that washing in the curative waters can aid fertility.

Enjoying such a close encounter with a croc is a once-in-a-lifetime experience that leaves me feeling like Crocodile Dundee; my guide even presents me with a crocodile-tooth necklace as a souvenir.

It’s not what I’d have expected from a simple winter-sun escape, but as I’m about to discover, Kachikally is just one of The Gambia’s eye-popping animal attractions. 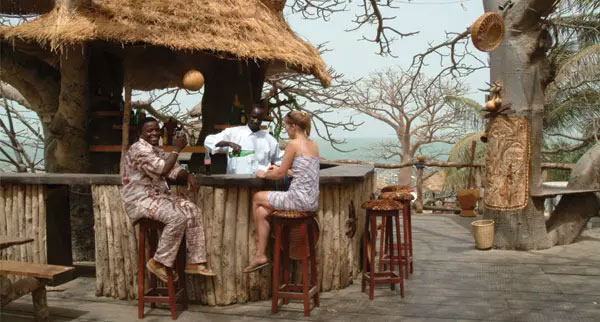 After recovering from a few political wobbles and negative coverage of the ebola outbreak – which impacted tourism, despite not a single case being reported in The Gambia – it’s most definitely this small country’s time to shine again.

With palm-backed beaches, bathtub-warm waters, epic sunsets and year-round temperatures of about 32C, the Smiling Coast of Africa is ideal for beating the winter blues.

“The West African nation is a six-hour direct flight from London and is conveniently on the same time zone as the UK, so jet lag is not an issue.”

The beaches are less crowded than those in the Mediterranean and have a distinctly African flavour: women in traditional dress carry fruit in baskets on their heads; cattle roam freely on the sand; locals ride their motorbikes up and down the beach; and stalls sell refreshing baobab juice and moreish wonjo juice, made from dried hibiscus flowers and sugar.

The West African nation is a six-hour direct flight from London and is conveniently on the same time zone as the UK, so jet lag is not an issue. Travellers just need to take anti-malarials and arrange a few jabs.

It might be better-known as a budget-friendly fly-and-flop holiday spot, but mainland Africa’s tiniest country – it’s smaller than Yorkshire – has an abundance of wildlife and should be on every animal lover’s bucket list. 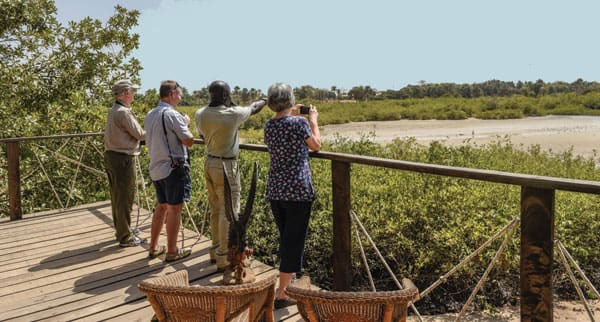 I enjoy more crocodile encounters at nearby beach bar and restaurant Calypso, which overlooks a croc‑infested lagoon. Here, I spot a few of the carnivores lurking at the water’s surface, while I sip cocktails and JulBrew beer, and feast on mouthwatering prawns.

The crocs here frequently pop up out of the water, and can be gawped at in all their glory every day at 4pm, when they’re fed.

“I spot a few of the carnivores lurking at the water’s surface, while I sip cocktails and JulBrew beer, and feast on mouthwatering prawns.”

Crocs aside, Calypso is worth a visit for its chilled-out vibe: diners sit in the shade of thatched cabanas encircling the creek, or high up in the handsome treehouse, with views over the lagoon and sea.

While monkeys are frequent visitors to hotel gardens and balconies, Bijilo Forest Park is a beautiful haven for green monkeys and the endangered western red colobus monkey.

Flanking the Atlantic coast near main drag Senegambia Strip, the park is worth a visit, if only to enjoy some shady respite from the sizzling heat.

We follow the marked trail through the tranquil forest, goggling at birds and lizards, and not seeing a single other person during the entire hike.

Suddenly, we’re sprung upon by a troop of adorable green monkeys. There’s nervous excitement as they surround us and come within touching distance, but they’re not aggressive, and we take a few snaps before continuing on our way. We even spot the heartwarming sight of a tiny infant monkey clinging to its mother’s stomach. From that point on, we see dozens of the mischievous creatures swinging in the trees, before we exit onto the beach. 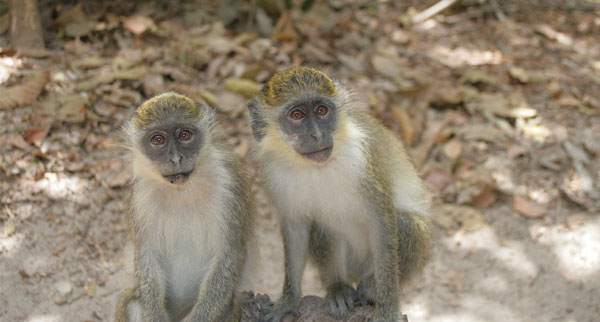 You don’t even need to leave your hotel to experience The Gambia’s wildlife. Every day, I wake up to the cheeps and chirps of birds and insects, and watch monkeys swinging in the baobab trees in the hotel’s lush tropical gardens, bright with butterflies and eye-catching birds. In fact, there are more than 540 native species of birds flitting around The Gambia, including kingfishers, hooded vultures, egrets, sunbirds, herons, and the brilliantly blue-green abyssinian roller.

“Although exotic birds can be seen wherever you stay, keen twitchers tend to favour the Bakotu Hotel, which has a bird-viewing platform.”

I spend one morning watching scores of magnificent vultures being fed at the Senegambia Beach Hotel, a free daily activity open to all.

Although exotic birds can be seen wherever you stay, keen twitchers tend to favour the Bakotu Hotel, which has a bird-viewing platform over the Kotu Stream, and is naturalist Chris Packham’s preferred Gambian bolthole.

Karen Durham, product manager at The Gambia Experience, says it’s the “ease of interaction with the local wildlife” that makes The Gambia such a fascinating place to visit. “It’s not such a bad beach destination either,” she adds. 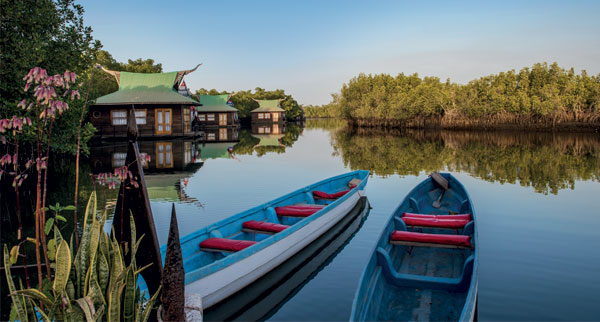 For an off-the-beaten-track adventure, visitors can stay in a floating lodge at Mandina Lodges, tucked away in the Makasutu Culture Forest on a mangrove-rich tributary of the River Gambia, just a 40-minute drive from the coastal resorts.

Perfect for barefoot luxury, the plush lodges have open-air showers, private roof terraces, four-poster beds, and fans instead of air-conditioning to fit with the retreat’s eco philosophy.

Travellers who don’t stay at Mandina can still explore the privately owned forest on a day trip, either on foot or on a dugout canoe ride. Look out for a wealth of bird life, including kingfishers, herons and weaver birds, as well as monkeys, baboons and reptiles.

“Perfect for barefoot luxury, the plush lodges have open-air showers, private roof terraces, four-poster beds, and fans instead of air-conditioning.”

Further inland is the Chimp Rehabilitation Project, home to 100 chimps living free on three islands. Set deep within the River Gambia National Park, guests can stay in comfy safari tents on raised platforms with sweeping views of the park. Chimps can be spotted during boat trips that run around the islands.

From getting close to crocs to gawping at monkeys, it’s virtually impossible to visit The Gambia and not enjoy its natural highlights.

“I can’t think of another destination that is so easily accessible from the UK yet offers such a wide range of wildlife experiences,” adds Durham. 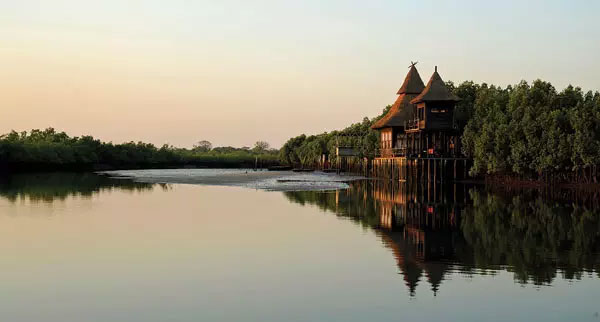 The Gambia Experience offers seven nights’ B&B at the three-star Senegambia Beach Hotel from £599 per person, based on two sharing a standard room in December. The price includes flights and transfers. A three-night add-on at Mandina Lodges costs from £299 per person, including transfers.
gambia.co.uk

Twin The Gambia with Senegal

Recommend that wildlife lovers and adventure seekers twin a break to The Gambia with a few nights’ glamping at Fathala Wildlife Reserve in Senegal, a short hop across the Gambian border on a ferry boat laden with livestock and locals.

Guests stay in one of 20 luxury air-conditioned safari tents that feature four-poster beds, open-air showers and free-standing baths. There’s a plunge pool and open-air restaurant sited next to a watering hole, where white rhino and warthogs come to feed at sunset.

“Fathala Wildlife Reserve in Senegal is a short hop across the Gambian border on a ferry boat laden with livestock and locals.”

The 6,000-hectare reserve is populated by zebras, antelopes, warthogs, monkeys and giraffes, which are best viewed on a two-hour safari. Other tours on offer include a sunset mangrove cruise.

Three-night add-ons at Fathala Wildlife Reserve start at £449 per person, including transfers, with The Gambia Experience.