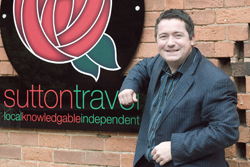 After being made redundant from Harvey World Travel (HWT) last Christmas, Andy Tomlinson joined thousands of staff across the UK facing an uncertain future.

Like many in the industry, Andy’s aim was to secure another job at a similar level. His retail experience counted in his favour: prior to four years at HWT, where he ended up general manager, he worked for First Choice and Holiday Hypermarkets.

Initially, setting up on his own was not a consideration. “It was only after a couple of months looking around for alternative positions without success that I decided to plough my savings into setting up Sutton Travel,” said Andy.

“It was a case of either looking for a suitable position and eating into my personal savings for six months, or investing the money into something that is mine and which will hopefully give me a half decent income a few years down the line.”

But the decision to put his redundancy money into launching Sutton Travel in his home town of Sutton Coldfield, near Birmingham, in July is already starting to pay off.

Within the first fortnight, the travel agency, which specialises in upmarket holidays, had exceeded its first month’s targets.

Average sales values for holidays sold are more than £1,000.

The agency has relied on word of mouth, Facebook, Twitter, local flyers and advertising to spread the word.

Andy admitted he was surprised by the level of bookings considering the state of the economy. “We have been rushed off our feet; it has far exceeded our expectations,” he said.

The agency has set up a page on Facebook, originally inviting 25 friends and colleagues to join. Within a week it had 60 members and it now has more than 100. The page gives updates on the shop’s progress. Sutton Travel is also on the micro-blogging site Twitter.

Andy said: “Already we have had enquiries via Facebook for bookings, and by having a presence on Facebook and Twitter, it helps keep the brand in people’s minds.”

The agency is a member of the Freedom Travel Group, part of the Co-operative Travel Group. Distribution director Alistair Rowland said Tomlinson’s success was no surprise given his experience, knowledge of the sector and the local area, and a sensible approach to marketing, despite the current climate.

He added: “He’s not starting too big; he’s not saying he’s going to open 10 shops. Given the economy, Andy has done all the right things to make it work.”

He admitted Freedom was having to support new members to a greater degree, but said applications to join were up on last year and in double figures. Freedom has 140 members. “Normally applications slow down around this time, but people are looking for whatever security they can find,” he said.

Using social media sites is a low-cost route to marketing to younger customers, he added, but admitted there was a slow take-up among agents. “Everyone is trying to hook customers in their twenties and keep hold of them, but traditional agents have a bit of a journey to go on,” he added.