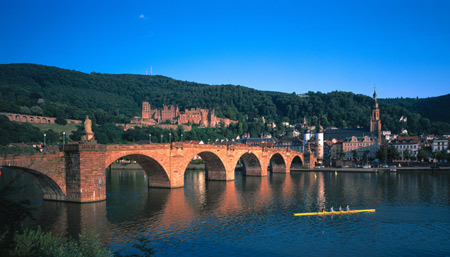 Attracting four million people every year, Europa-Park is Germany’s largest theme park, sprawling across an area equal to 140 football pitches. Located in Rust, near Freiburg, the park aims to promote European culture and unity by bringing 12 countries to life.

Visitors can find models of feral cats in the Greek zone, pirates in Portugal, and Sputnik in the Russian zone, as well as plenty of stomach-churning rides. They can enjoy a whirlwind tour of Ancient Greece on the Pegasus roller coaster, go rafting in Scandinavia, then munch on a crêpe in France.

Daredevils can plummet towards the ground at 80mph on the Silver Star ride – Europe’s highest and longest roller coaster. For a heart-stopping coaster ride in pitch darkness, take a seat on Eurosat.

The park offers exhilarating entertainment for all ages, including medieval tournaments, figure skating and children’s theatre.

Sample product: Keith Prowse Attraction Tickets offers a one-night stay at the Hotel Colosseo for £76.50 per person, including a ticket to Europa-Park. Book flights from London to Basel-Mulhouse-Frieburg airport with easyJet. keithprowse.com, 02890 232 425

The 14-mile Nurburgring, Germany’s most famous race track, twists and bends through the hilly forests of High Eifel. It used to be known as one of the toughest tests in the world for Formula 1 drivers – former world champion Jackie Stewart branded it “the green hell”.

Visitors can follow in the tyre marks of racing legends and do a lap of the track at racing speed for €15.

The racetrack has recently been transformed into a leisure complex with showrooms from leading car manufacturers, restaurants and shops. New attractions include a simulator ride, where passengers can accelerate to speeds of 134mph within 2.5 seconds. Guests can even stay in the Formula 1-themed Lindner Congress and Motorsport Hotel.

Dertour tours manager Lawrence Peachey says: “A trip to Nurburgring has become more of a family occasion since turning into a themed holiday experience.”

If tranquillity is at the top of your clients’ agenda, suggest a stay at Baden-Baden, a sleepy spa town in the foothills of the Black Forest mountains.

The town was made famous in the UK after WAGs Coleen Rooney and Carly Zucker stayed there during the 2006 World Cup and splashed the cash in the town’s upmarket boutiques. It was the Romans who first made the place popular, though, discovering its hot springs more than 2,000 years ago.

For an indulgent treat, relax in the salt and radon-rich springs where water temperatures top 70C and are known for their health benefits. Rejuvenate body and mind by opting for one of many treatments, which are said to relieve cardiovascular and rheumatic diseases, psychosomatic fatigue and disorders of the nervous system.

Sample product: Castaways offers seven nights’ bed and breakfast at the five-star Brenner’s Park Hotel and Spa in Baden-Baden for £1,469 per person in November, including flights and private transfers. castaways.co.uk, 01737 812 255

Hailed the land of a thousand lakes, the Mecklenburg Lake District can be found between Berlin and Schwerin.

Clients can float along the calm waterways in a boat for a romantic break or a family holiday with a difference. The tranquil and clean waterways are flanked by dense woodlands and lush meadows, dotted with historic towns and quaint villages.

After a slow cruise on the shimmering lake’s gentle waters to get a close look at the abundance of wildlife both on and offshore, such as storks, cranes and sea eagles, visitors can jump in for a refreshing swim or make the most of the array of water sports available. Adventurous clients will find plenty of places to stop and explore on foot or by bike, including the historic town of Robel.

Float into Germany’s vibrant capital Berlin to get a new angle on the city, cruising past government buildings and historic gems. A boating licence is not needed.

Sample product: Dertour offers a seven-day boating holiday from £529 per person, including flights, transfers, and the hire of a Komoran 1100 S, which seats up to four people. dertour.co.uk, 020 7290 1104

Southern Germany’s green and scenic land is dotted with fairytale castles, its varied terrain an ideal tramping ground for hikers and bikers who have a passion for history.

Take a tour or hire a car to follow the route of the Romantic Road, which begins in Wurzburg and ends with the castles of Fussen in the south, passing picturesque medieval villages and rural landscapes.

Historic towns that merit exploration include Wiesbaden and Heidelberg, where poets and artists have flocked for centuries in search of inspiration.

Set on the banks of the river Neckar, Heidelberg is a maze of cobbled streets lined with bustling cafes and characterful pubs. Wiesbaden is home to 27 hot springs and is one of Europe’s oldest spa towns.

Anyone with an interest in the Second World War should visit Colditz Castle, the most notorious of prisoner-of-war camps, used for allied officers who had repeatedly escaped from other camps. Now a museum, visitors can see some of the escape tunnels built by prisoners.

Sample product: Titan HiTours offers the 10-day Imperial Cities and Palaces tour, including Heidelberg, Colditz, Wiesbaden, Nuremberg, Wurzburg and the Black Forest, for £1,455 per person in October, including flights, transfers, accommodation with 10 breakfasts and five evening meals, and coach travel with the services of a tour manager. titanhitours.co.uk, 0800 988 5858