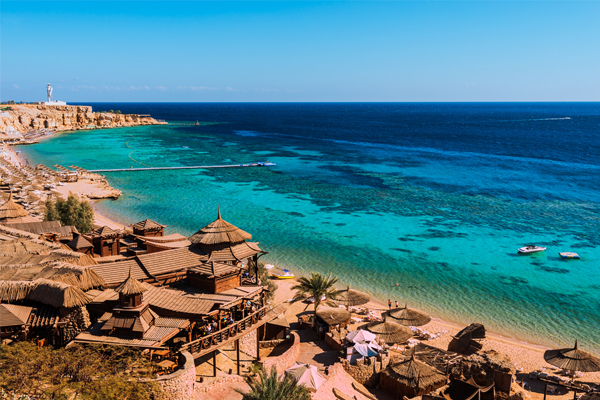 The government should relax restrictions to allow direct flights from UK to Sharm el-Sheikh to resume.

The call came from Egypt’s ambassador to the UK.

Tarek Adel told the BBC Egypt had finished working with British security teams to upgrade its airports and was ready to welcome flights again.

All UK flights to the Red Sea resorts airport were banned in November 2015 following the bombing of a Russian aircraft which killed all 224 people on board.

The Islamic State group claimed it was behind the attack.

Sharm el-Sheikh previously attracted hundreds of thousands of visitors from the UK each year, making it an important resort for airlines and holiday companies.

But despite travel firms calling for a decision on when UK flights could resume, the Foreign and Commonwealth Office continues to advise against “all but essential travel by air to or from Sharm el-Sheikh”.

“British direct flights to Sharm el-Sheikh have been suspended since November 2015 and since that date we have been working very closely with British technical and security teams to upgrade many of the facilities in Egyptian airports in general and Sharm el-Sheikh in particular,” Adel said.

“We have concluded the work in this regard and that was in close co-ordination with the British technical teams and we are set to be ready to receive once again direct flights from Britain.”

The UK government suspended flights to the Red Sea resort following the bombing on October 31, 2015, which happened on a charter aircraft soon after take-off from Sharm el-Sheikh airport.

More than 16,000 Britons stranded in the area were repatriated on rescue flights amid increased security.

Egyptian officials have since admitted that at the time, Sharm el-Sheikh airport fell well short of international security standards.

They responded to a January 2016 report about its shortcomings by allowing in a team of UK aviation security experts who spent time assessing Egypt’s major airports.

“We have to be careful because what we may perhaps consider suitable security is not considered the same elsewhere,” he said.
Phillips, who has not visited the area since 2015, said that Sharm el-Sheikh itself was very vulnerable because of its remote location.

The former head of the National Counter Terrorism Security Office said one of the resort’s issues was that the surrounding desert made it hard to control its borders because “you can walk across the desert”.

However, he said that the issue needed to be revisited by the British government because Egypt’s economy needed tourism.

“It [Sharm el-Sheikh] will always be at the top end of the threat level for holidaymakers. But that doesn’t mean to say you shouldn’t go because there are other places that we go to similar to that,” he added.