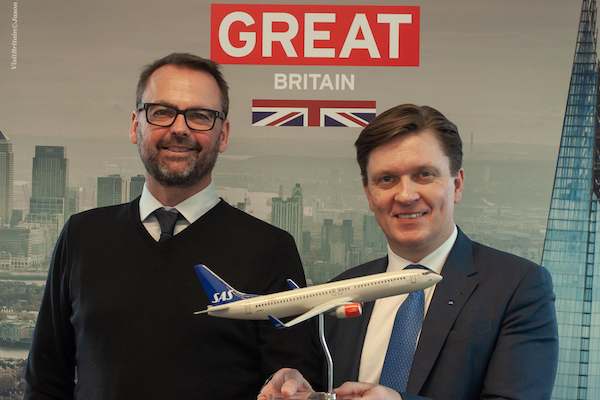 The digital campaign starts today (February 22) and will run for five weeks in Denmark, Norway and Sweden.

SAS serves Heathrow and will launch a new flight to Stansted from April 1.

The campaign targets repeat visitors to the UK and travellers described by VisitBritain as ‘buzzseekers’ and ‘explorers’, looking for “adventure and authentic experiences”.

The marketing is highlighting London destinations beyond Zone 1, encouraging visitors to discover the boroughs of Greenwich, Hackney and Richmond.

There is also a focus on cities and towns within a two-hour radius of London, such as Brighton, Oxford and Windsor.

Robin Johnson, VisitBritain’s Europe director, said: “It is great to be partnering with SAS for the first time, amplifying our campaign to convert the aspiration to visit Britain into actual bookings and promoting our message of welcome.

“We know that visitors from Scandinavia rate Britain highly for its famous sights and monuments and our campaign highlights the fantastic destinations and attractions that travellers can discover within a short journey from central London.”

Will Reed, Scandinavian Airlines’ head of international marketing, added: “We know our travellers fly every week in their thousands to visit London and by partnering with VisitBritain we aim to share more of the easily accessible places and hidden gems, either inside or outside of London, to explore and experience somewhere new.”

The content will run across VisitBritain and Scandinavian Airlines online and social channels including dedicated campaign pages.

The campaign can be seen in cinemas, print, social media and metro advertising in Paris until the end of March.

Pictured from left: Gary Robson, VisitBritain, with Will Reed (SAS).