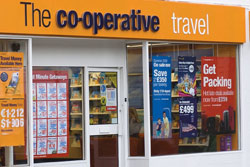 The Co-operative Travel high-street stores will benefit from online bookings made by the group in an effort to create a more “joined-up” approach between the shops and the website.

Director of distribution Alistair Rowland said: “We don’t want customers to feel pulled between the shop and the site, so we need a more joined-up approach. The site should be seen as supporting the shops.”

Rowland said there will be a small growth in the number of The Co-operative Travel stores next year.

“We tend to refurbish or relocate 10% of shops a year, but we have not narrowed the estate this year.

“We currently have 410 stores and would like to get to 500 at some point. There will be a small growth in the overall number next year.”

The Co-operative Travel is the latest travel company to adopt a multi-channel approach. Midcounties Co-operative has transformed two shops into multi-channel concept stores, while Thomas Cook has run a trial allowing customers to chat to agents online through the company’s website.