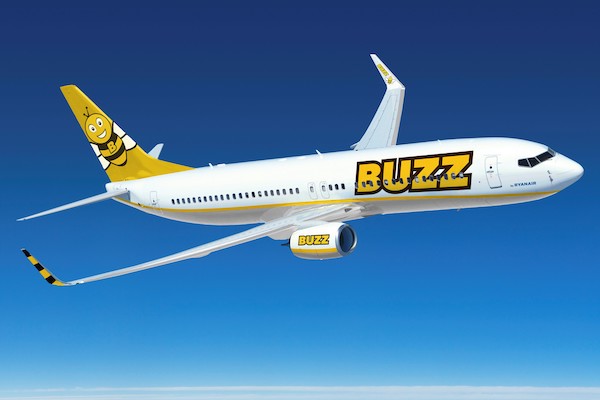 Ryanair Sun – a standalone business unit of the Ryanair Group – will be rebranded as Buzz this autumn.

Ryanair acquired the Buzz brand in 2003 when it bought a rival low-cost carrier operating with that name from KLM UK.

It operated from Stansted but was closed down in 2004.

Ryanair Sun obtained its Polish Air Operator’s Certificate (AOC) at the beginning of 2018 and started operating for Polish tour operators in summer 2018 with a fleet of five aircraft.

Buzz’s fleet currently includes 17 aircraft, and will expand to 25 in summer 2019.

It will operate charter services and scheduled Ryanair flights.

Buzz will launch its own website and app in autumn 2019, enabling Polish customers to book all Ryanair flights, including these operated by Buzz.

It is one of four airlines of the Ryanair Holdings Group, alongside Ryanair DAC, Laudamotion and Ryanair UK.

Juliusz Komorek, chairman of Buzz supervisory board, said: “We are excited to launch Buzz today, and to see our newly branded aircraft appear in Poland this autumn.

“Over the last 15 years, Ryanair has grown to become Poland’s biggest airline, thanks to the unbeatable combination of the lowest fares, best customer service and largest route network – and we now expect that Buzz will be Poland’s number-one airline.”

Michał Kaczmarzyk, Ryanair Sun chief executive, added: “Following a successful year of growth for Ryanair Sun, we are delighted that our planes will have a new and unique branding as we launch Buzz.

“Our goal is to offer services at the highest level to both customers and tour operators.”