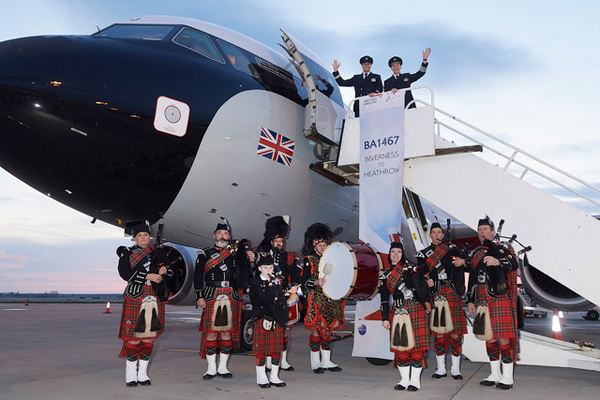 The first early-morning flight by British Airways between Inverness and Heathrow for more than two decades took off today.

The additional frequency means that travellers will be able to fly between the two cities and return the same day for the first time since the route was re-introduced in 2016.

The new schedule will see a 30% hike in capacity on the route and brings the number of flights up to three returns on Saturdays and Sundays, with a double daily service on weekdays.

A double-daily service between the two cities will run seven days a week from October.

Return economy fares from Inverness to London lead in at £61.01.

Today’s morning flight was operated by an Airbus 319 aircraft in the heritage livery of BEA, part of BA’s centenary celebrations.

BA Inverness airport manager Phyllis Stuart said: “This is an important day for British Airways, for Inverness and for the Scottish Highlands and Islands.

“The introduction of our new and expanded schedule gives the people and businesses of Inverness and the Highlands and Islands even greater access to more than 150 destinations on our global network from Heathrow.”

The Scottish airport’s general manager Graeme Bell added: “The air link between these two cities goes from strength to strength and we very much welcome these additional flights.

“The new service will provide business travellers with more flexibility and connectivity between the two cities.

“The additional flights will also enhance worldwide connections to the Highlands and Islands, making the area even more attractive to overseas visitors keen to experience the best of what our region has to offer.”

More: BA flight lands in Edinburgh instead of Düsseldorf by mistake