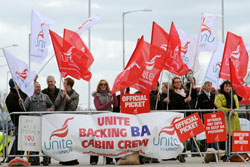 Travel agents are demanding a guarantee their goodwill towards British Airways will be repaid when the cabin crew strike is over.

The trade emerged with credit from last weekend’s BA strike and praised the airline for its handling of the disruption.

Advantage business travel director Norman Gage said: “The agent community can hold its head high. The strike was not bad news for people who booked with an agent. It has been very busy, but a positive experience.

“BA has handled it well. We knew 48 to 72 hours in advance the flights that were going to operate and any agent worth their salt had time to contact clients.”

However, Gage added: “My anxiety is that BA will bombard people with marketing messages after the strike, encouraging them to book direct. It would be a kick in the teeth after agents have supported BA through this.”

He warned the airline: “The longer the strike goes on, the more people will move away from BA.”

Traveltime managing director Barry Moxley said only a ‘handful’ of customers were affected by the strike and his agency was able to book them all on other flights.

“People on the BA flights accept the decline in service as long as they can get from A to B,” he added.

“However, if the strikes go on for a long time it will have a major effect on BA and booking passengers on to other flights can be very time-consuming especially when you could be doing more lucrative things.”

Mark Brock, associate director of Barrhead Travel, said the Scottish agency had been badly affected as many of the flights cancelled by BA were connecting services to Scotland. He added that about 150 customers were affected, but they all got away after the agency booked them on to other flights.

“There was quite a shortage of replacement flights but we pulled out all the stops and not a single passenger missed their flight or was left stranded,” he said.

Get ready for a second strike

March 27-30: For the four days of the strike, clients may be rebooked with BA or another carrier whether or not a flight is due to operate. But refunds available for cancelled flights only, unless fares allow.

Those on regional departures with onward flights from Heathrow or Gatwick have the choice of rebooking, using alternative transport for domestic sector (with refund of UK fare) or a full refund, regardless of whether the long-haul flight will operate.

March 31: For flights cancelled as a result of strike, you can rebook clients on another BA flight on same route, or claim a refund.