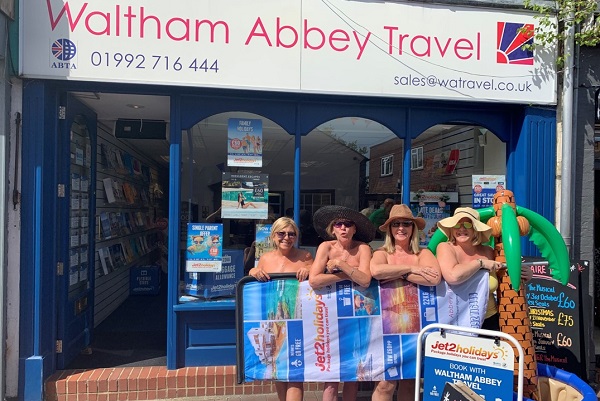 The agency was one of 20 independents that bagged £500 to spend on marketing activity with the operator.

Waltham Abbey ensured full exposure for the business as four of the team stripped off behind a Jet2holidays-branded banner.

The ladies drew plenty of attention to the window, which was peppered with Jet2holidays posters, despite being outside the shop.

Partner Teresa Marie said: “When we first thought about it we thought we had better just go bold and really go for it.

“We thought we’d bring it out to the street because that’s where it all happens. There’s a wine bar across the road and everyone was looking over at us. We had a right team of people waiting to take pictures. There was six of us ready to go, but there was only space for four behind the banner.”

Marie said the stunt has helped raise the agency’s profile in the market town, near Enfield and Cheshunt, as well as bagging them the marketing spend from Jet2holidays.

“We put it on Facebook too, and everyone’s been asking us what we’ve got going on,” she added. “We’re always busy but we’re hoping a few of the people who saw it will come to us when they book their next holiday.”