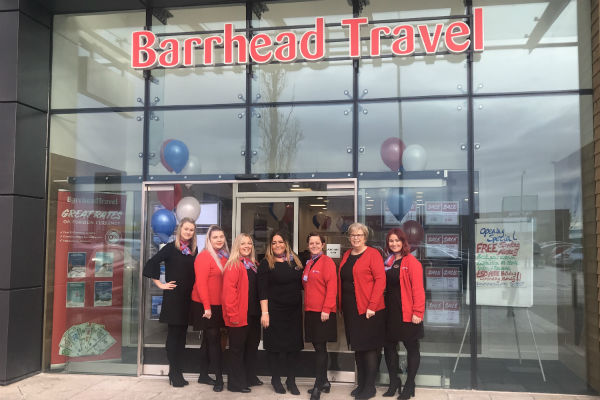 Barrhead Travel has confirmed it still plans to significantly expand its travel agency network by up to 100 shops following the announcement that Hays Travel had acquired the leases for the entire Thomas Cook retail estate.

The Travel Leaders-owned company was one of the major agency chains to put in a bid for leases for former Cook stores, saying the situation “increased the opportunity for and urgency of our expansion plans”.

Following Wednesday’s announcement that the 555 ex-Cook leases were being acquired by Hays Travel, Barrhead issued a statement reiterating that it was still pursuing a significant expansion and could take on former Thomas Cook employees.

Barrhead currently operates a network of 76 own-brand and managed services shops, with a strong presence in Scotland as well as locations in in Newcastle, Cumbria, Leicester, Southampton and Belfast.

Mike Batt, Travel Leaders Group chairman, said: “Since our acquisition of Barrhead Travel, we have been exploring ambitious expansion plans for this trusted brand. The situation with Thomas Cook has accelerated those plans.

“We believe there is strong demand for the services provided by Barrhead Travel so we are moving full steam ahead with our growth strategy.”

He added: “This plan could provide hundreds of available jobs for Thomas Cook employees who were displaced by the closure of the branches.

“It would also ensure that the travelling public in communities across the UK have access to high quality travel services provided by professionals and operated by a strong, stable company.”

Speaking to Travel Weekly, Batt said the group was looking for UK-wide coverage under the Barrhead brand, and that Thomas Cook’s demise had “turbo-charged” the already “aggressive growth plans”.

The locations of the new shops will be determined by “the availability of fairly-priced retail locations”, he added.

“With these stores being closed in such an immediate manner it’s created a huge vacuum in the UK marketplace. We want to help fill that vacuum. If Cook hadn’t have closed, we still would’ve had a long-term [expansion] goal of around 100 shops. But the Cook closures have increased the opportunity.”

Jacqueline Dobson, president of Barrhead Travel, said a recruitment drive had been launched among Thomas Cook employees, with a number of former Cook workers already taking up new roles with Barrhead.

She added: “With the backing of Travel Leaders Group, we are looking forward to opening more Barrhead stores and helping our colleagues across the industry get back to serving their loyal clients.

“The high street travel agency is very much alive in the UK and is pivotal in today’s holiday booking journey. Customer experience and employee development remain our number one priority and this philosophy will be prominent across all of our new stores.”