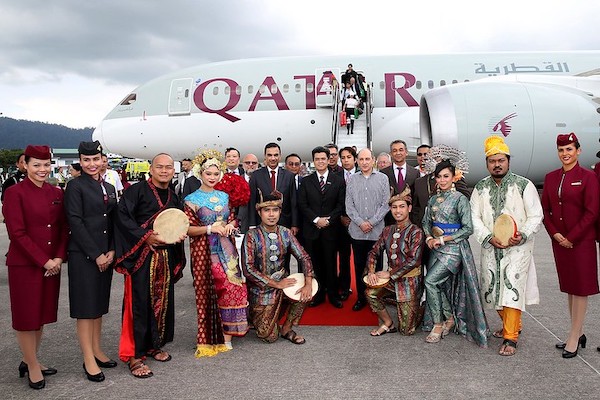 Qatar Airways has started flights from its Doha hub to the Malaysian archipelago of Langkawi – the airline’s eighth new destination in 2019.

The four-times-weekly service is operated by a Boeing 787 Dreamliner and will rise to five times a week from October 27. It serves Langkawi via the Malaysian city of Penang.

The first flight landed at Langkawi on Tuesday (October 15) and an extra service operated today (October 16) to bring VIPs and international media to the destination to celebrate the launch of the service.

Akbar Al Baker, Qatar Airways Group chief executive, said: “With its forested hills, stunning white-sand beaches and glimmering turquoise waters, Langkawi is fast becoming one of southeast Asia’s most highly sought-after destinations and the reason why we knew we had to launch our flights here.

“We look forward to welcoming business and leisure travellers alike on board so that they may experience the ‘Jewel of Kedah’.”

Mohd Shukrie Mohd Salleh, chief operating officer of Malaysia Airports, added: “The inclusion of a new international airline to Langkawi will definitely spur our Visit Malaysia 2020 campaign by increasing the number of tourists into Langkawi.”

Other new destinations added to the airline’s network in 2019 include Lisbon, Malta, Rabat, Davao, Izmir and Mogadishu.

Furthermore, the carrier will add Gaborone, Botswana, next month, with services to Luanda in Angola and Osaka in Japan, launching next year.