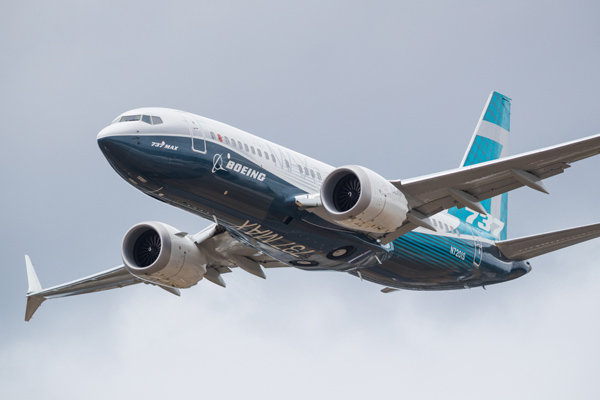 The Boeing 737 Max will not return to service before 2020, according to the head of the US Federal Aviation Administration.

The aircraft type, which has been grounded since March following two fatal crashes, needs to pass 12 tests before the regulator clears it to return to service.

Boeing had hoped the Max would be cleared to fly again before the end of this year.

FAA chief Stephen Dickson made the disclosure as it emerged at a Washington hearing that analysis after the first crash in October last year predicted there could be up to 15 disasters over the lifetime of the aircraft without design changes.

However, the FAA did not ground the Max until a second crash five months later.

Dickson, who started in August, said this was a mistake.

The FAA risk assessment was revealed during a US congressional hearing yesterday.

Lawmakers are investigating Boeing following 737 Max crashes in Indonesia in October 2018, and Ethiopia in March. The disasters killed 346 people in total.

Air safety officials investigating the crashes have identified the automated MCAS flight control system as a factor in both accidents.

The FAA’s probe into the October Lion Air crash called for Boeing to redesign its system, warning of a risk of more than a dozen crashes over the 45-year lifetspan of the roughly 4,800 737 Max aircraft likely to be in service.

Regulators also issued an alert to airlines, but the agency did not ground the aircraft until after the Ethiopian Airlines crash in March, several days after action by other countries.

This was “not satisfactory,” Dickson told the House of Representatives transport and infrastructure committee, later admitting the administration made a mistake at some stage in the process.

Boeing is revising the MCAS software, but lawmakers say their investigation has shown that the aircraft manufacturer was aware of flaws in the system.

Ed Pierson, a former senior manager on the 737 production line, told Congress he repeatedly warned Boeing of the safety risks caused by what he described as a “factory in chaos”, but it had little effect.

US government regulators have shown little interest in his concerns after the crashes, he claimed.

Pierson said in prepared testimony: “I remain gravely concerned that… that the flying public will remain at risk unless this unstable production environment is rigorously investigated and closely monitored by regulators on an ongoing basis.”

Dickson said the FAA is probing production issues and is considering further actions against Boeing.

“Company executives and senior leaders on the 737 programme were made aware of Mr Pierson’s concerns, discussed them in detail, and took appropriate steps to assess them,” it said.