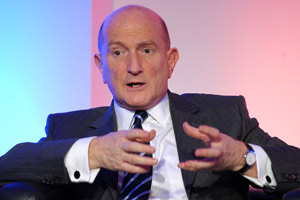 Travel agents will be in open revolt should flight plus be added to financial protection and could even refuse to pay it, it has been predicted.

Speaking at the Institute of Travel and Tourism Question Time this afternoon, chairman Stephen Freudmann slammed the proposition which could make agents liable for the failure of suppliers if Atol to Atol regulations become further formalised.

With many of them potentially facing ruin under the new proposals, while he urged agents to boycott making the payments.

Freudmann said: “Everybody I’ve spoken to says change is needed because no-one understands what’s protected and what’s not protected.

“They’re going to rebel … should they have to pay for the likely failure of one of their principals.”

Steve Endacott, the chief executive of the On Holiday Group,  agreed the proposal to add flight plus was wrong, adding: “I regard it as herding travel agents towards a cliff, not telling them there’s a cliff and then pushing them over.”

Freudmann said instead airlines should be made to shoulder the cost of flight plus protection although the panel agreed they were far too effective at lobbying against it.

He added: “Agents are being asked to provide protection for airlines that won’t do it for themselves; we should be saying we have to get the airlines on board.

“Over the last five years they have been the biggest risk and we are letting them off the hook.

“Government after government has refused to address this. Government doesn’t listen to us , they don’t take us seriously enough.

“Should we refuse to co-operate? There is an argument that we should until they take us seriously.

“Independent travel agents in this country have been a great success. Travel agents are the last bastion of independence and they’re doing very well.

“It would be disgusting in my opinion if an extra burden was put on them.”

Roger Allard, chairman of the All Leisure Group, added any protection should be blanket imposed on all travellers, adding: “If you step on a plane you should have to pay £1 for repatriation and £3 for financial protection.”

Antony Martin, managing director of Rock Insurance, added: “This is probably five or 10 years from getting sorted and we need it fixed now.”