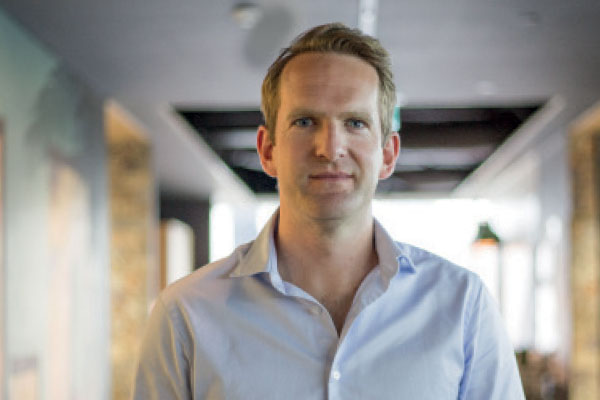 “That sucks as a way to live your life,” he says. “I looked at the two things I loved – football and travel – and since I wasn’t good enough to play for Tottenham, I joined Intrepid instead.”

Intrepid’s 30-year history in sustainability was a big draw for Thornton – a Brit, who now lives in Australia. “Everybody is talking about it, but the fact we have 30 years behind us, is important,” he says.

“We don’t just say we’re strong on sustainability and purpose, we have independent verification of it.”

In 2002, it founded the Intrepid Foundation, and has since raised over AU$8 million (£4.1 million) for more than 70 NGOs, including AU$1.5 million last year alone.

Then in 2005, when the company’s founders read Professor Tim Flannery’s 2005 book The Weather Makers, and watched Al Gore’s An Inconvenient Truth, they decided to create a company that took seriously the challenges to the planet posed by travellers.

In 2014, it set out its stall as a purpose-led operator, becoming the first to ban elephant riding and subsequently child orphanage visits.

In 2017, Intrepid signed up to the UNGC’s Women’s Empowerment Principles. And in 2018, it became the world’s largest travel business to achieve B Corp certification, joining the likes of Innocent Smoothies, outdoor clothing company Patagonia, Ben & Jerry’s and The Body Shop.

Just last month, as fires ravaged large parts of Australia, Intrepid became the first Australian company to sign up to the ‘Tourism Declares Climate Emergency’ initiative, based in Britain. The grass-roots movement offers like-minded tourism operators a platform to band together and swap strategies on ensuring their tourism practices are as sustainable as possible, short of not travelling at all.

To join, companies must agree to continue to cut their tourism company’s carbon emissions and to advocate for change – including supporting urgent regulatory action to accelerate the transition towards zero carbon air travel.

“We know the travel industry contributes around 8% to total world carbon emissions. And we are agreeing, as signatories, that we want to help contain that figure.”

Intrepid has promised to offset 125% of its emissions by the end of this year, and has set itself the goal of transitioning to 100% renewable energy in its offices by 2025, and on its trips by 2030. Thornton believes such actions and credentials distinguish it as the leader in sustainable, experience-rich travel.

“There’s no doubt it’s a tricky time to be in tourism and no one has the answers to the many questions that keep arising,” he says. “But if we don’t act now, there will be no travel in future – no reefs, no beaches, no ski fields worth travelling to. Many of our prime tourism spots will be under water, melted or on fire.”

He continued: “The industry is starting to catch up – and not just in travel. Look at BlackRock [world’s largest investor], which has just joined Climate Action 100+ to put pressure on the world’s biggest polluting companies.”

Thornton is also keen to make the point that businesses with purpose can also be profitable.

Thornton says: “This is our fourth record year of top and bottom‑line growth. So you can be extremely profitable and growing and take this stance.”

Intrepid is 90% owned by its co-founders, with the remaining 10% of shares owned by 45 members of staff.

“This means we all benefit when the company does well. Everyone gets a dividend,” explains Thornton.

The UK market is important to Intrepid, contributing AUS$113 million to total turnover in 2019, up 12.8% on the previous year.

Currently, 45% of Intrepid’s business in the UK comes via the trade, with sales via travel agents growing by 16.7% last year, outpacing 10.4% growth in UK direct business.

“I imagine, given the Brexit environment, there won’t have been too many businesses recording 12.8% growth in the UK last year,” says Thornton.

Asked how Intrepid had performed so well in the UK amid such uncertainty, Thornton says: “It’s been a mix of things. We have some strong and exciting partnerships which have done well, and we’re also in a sweet spot in the way consumers are wanting to buy products. They are increasingly wanting experiences over possessions, and increasingly wanting to buy from sustainable companies.”

Thornton believes the UK has huge potential for further growth.

“We’ve done well in Australia, which is a country of just 24 million people. The UK has 60 million people, for whom it’s so much easier to travel – and we believe there is huge opportunity for companies in our space to become more of a mainstream holiday choice,” he says.

“You can go hiking up the Inca Trail or in the mountains of Nepal and sleep in a tent – we can do that kind of thing. But a lot of what we do is just go into a country, meet its people, try their food and stay in different types of accommodation and use different modes of transport.”

Intrepid is recruiting for a managing director for the EMEA region and another for North America. It had previously put the two regions together under Michael Edwards, a strategy Thornton admits didn’t work as the two markets are just too different.

Edwards left as he didn’t want to return to an EMEA-only role, and head of industry sales Andrew Turner is also moving on, joining Flight Centre’s DMC Discova next month.

Thornton’s first boss at Intrepid, Robyn Nixon, has been drafted in from Melbourne to oversee the UK in the interim until both roles are filled.

January has already got off to a flying start in the UK, according to Thornton, who reveals that sales were 9% up in the first 17 days of January on the same period last year.

Referring to the UK’s departure from the EU, Thornton says: “Regardless of your political views, the fact that a decision has been made gives clarity and will provide some confidence in the market. With that, and a new team in place, we expect to have a good year as a result.”