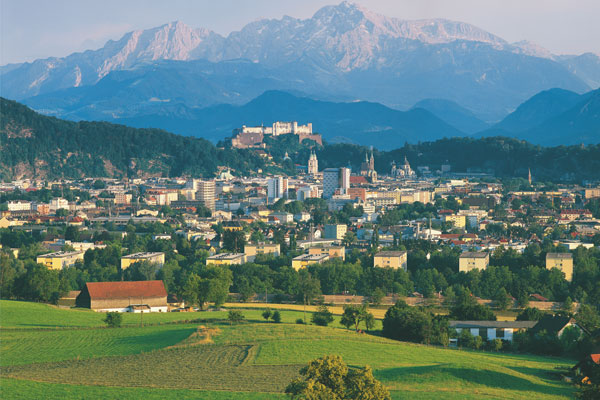 The best way to spend a weekend in the Austrian city, according to David Whitley.

Salzburg could well be Europe’s best weekend break all-rounder. It’s walkable, beautiful, crammed with attractions, and has several quirky excursions on its doorstep.

The Austrian city, which sits right on the border with Germany, was the birthplace of Mozart, it’s the home of a Unesco-listed old town and is perhaps most famous as the setting for The Sound of Music. But historical attractions aside, it’s kitsch, cultural and just cool enough to avoid feeling like a touristy museum piece. 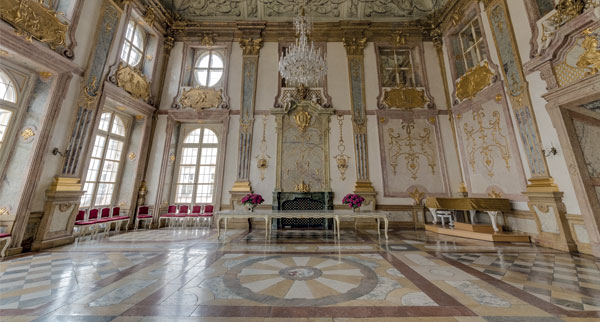 10.00: Get a taste of how Salzburg became rich on the back of its salt mines with a visit to the Residenz Palace. The traditional home of Salzburg’s Prince-Archbishops, it’s brimming with world-class art, enormous tapestries and sprawling painted ceilings. The Residenz can be combined with Salzburg’s stylishly baroque cathedral on the DomQuartier walking route. This takes you into the upper reaches of the cathedral, where you can better admire the organ and the dark-grey stone that makes the cathedral look so distinctive.

“Among the courtyards and ramparts are a few moderately interesting museums on subjects such as marionettes and the Prince-Archbishops.”

12.45: Lunch at cafe-restaurant Triangel should give a sniff of Salzburg’s cultural side. The walls are full of black and white photos of the Salzburg Festival, and the menu serves up Austrian classics such as goulash and schnitzel.

14.00: Take the cute little funicular up to the Hohensalzburg Fortress, which is essentially a village in its own right. A version of it has been standing since the 11th century, and is now the largest fortress in central Europe. Among the courtyards and ramparts are a few moderately interesting museums on subjects such as marionettes and the Prince-Archbishops, but it’s worth saving time for a peaceful walk across the Mönchsberg hill. This combines fortifications, woods and city views, before arriving at the contemporary art-packed Museum der Moderne. A lift through the mountain takes you back to the old town. 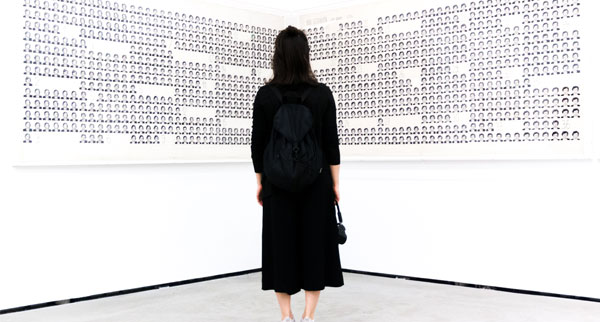 19.00: For a pre-dinner cocktail, Little Grain at Getreidegasse 34 shows that Salzburg can do hip and stylish. Hidden in a cave-like underground space, bartenders can whip up concoctions on the spot if you tell them what you like.

20.00: The Gasthof Goldgasse is a hugely atmospheric restaurant with wooden beams and little nods to tradition. The biggest nod of all, however, is on the menu – several options are based on recipes from an 18th-century cookbook. The signature dish is fried chicken in a copper pot, although the suckling pig with roasted pork fillet in a herb crust is phenomenal if you truly want to pig out.

“Hidden in a cave-like underground space, bartenders can whip up concoctions on the spot if you tell them what you like.”

22.00: Retire on a happily full stomach to the Villa Carlton, a handsome building near the Salzach River that has a few quirky design touches to keep things interesting. These include model bulldogs under the reception desk, eclectic but brightly painted chairs on the terrace and black and white photographs of the city in the rooms. Doubles cost from £110. A cheaper alternative is the Hotel Vier Jahreszeiten, which is solid, central and affordable, with rooms that feel warm and inviting rather than seeking to be cool. Expect to pay from £63 for a double. 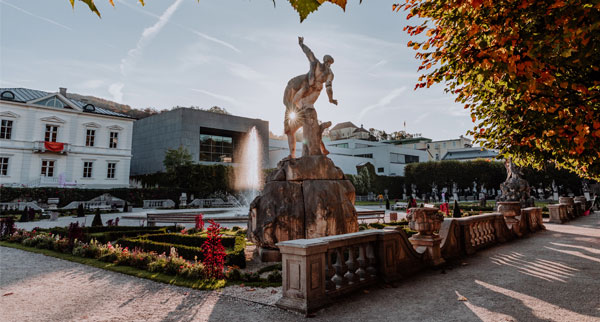 09.00: Get ready for a substantial dose of cheese on a bus tour of the key filming locations from classic 1965 musical The Sound of Music. Available through Do Something Different for £47 (£23 for under-12s), this starts outside the Mirabell Palace – home to the Do Re Mi fountain – and includes spots such as Nonnberg Abbey, the boating lake outside Leopoldskron, the Palace of Frohnburg (aka the Von Trapps’ house) and the gazebo at the Hellbrunn Palace. It finishes at Mondsee, in the Lake District, home of the church where Maria marries. Expect songs from the musical to be played on the bus all morning, with fellow passengers singing along.

“Get ready for a substantial dose of cheese on a bus tour of the key filming locations from classic 1965 musical The Sound of Music.”

13.30: For lunch, Humboldt Stubn combines the traditional – dishes such as tafelspitz (veal or beef in broth) and beef goulash – with modern flair. There’s a big emphasis on organic, locally sourced produce and staff being paid fair wages, with little nods to alpine kitsch with felt cutlery pouches and placemats. 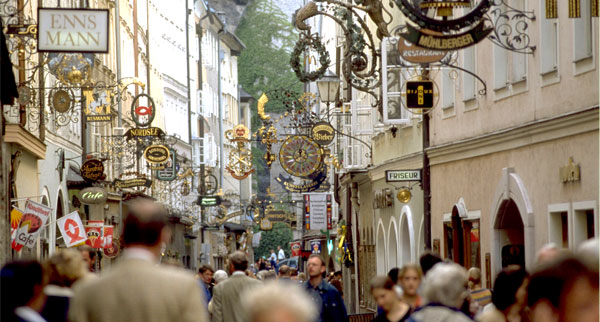 14.30: Take an amble along atmospheric Getreidegasse, which is becoming increasingly international, but is still home to some old-fashioned stores selling liqueurs, traditional costumes, hats and homemade umbrellas. It’s also home to two music-themed museums. Sound of Music World tries to tell the real story of the Von Trapp family, separating the truth from the reality-stretching inventions of the movie. Mozart’s Birthplace is devoted to Salzburg’s most famous son. The displays go into his life and works, and often bring in some quite surprising revelations. Mozart wasn’t just a natural genius – he was helped along considerably by pushy parents who had useful contacts.

17.00: Extend the walk by taking a look at some of Salzburg’s impressive public art projects. The most impressive of these is Sphaera – a man standing on a giant golden ball in Kapitelplatz – by Stephan Balkenhol.

“Sound of Music World tries to tell the real story of the Von Trapp family, separating the truth from the reality-stretching inventions of the movie.”

18.30: The Augustiner Bräu is an extraordinary place for a drink. In the lower reaches of a monastery, beers are poured straight from the barrel into grey stone tankards, then consumed at communal tables in a vast network of wood-panelled halls. There’s also a beer garden in summer. Food is simple, classic fare – giant pretzels, cheeses, sausages and huge hunks of pork – but the setting is special.

20.00: If you’ve decided you prefer Mozart to the Trapp family, head back to the Mirabell Palace for a classical musical concert inside the Marble Hall, one of few rooms to survive the devastating fire in 1818. This is where young Wolfgang used to play himself, although the works performed now branch out to other composers. 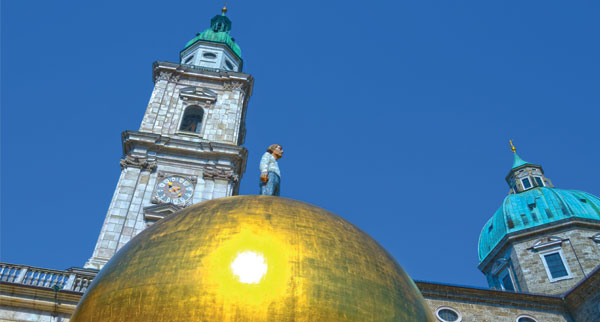 Bavarian Alps: Nip over the German border for some grade-A mountain scenery in the Königseeache valley. The half-day tour includes a trip to the salt mine at Berchtesgaden, where transport includes a ride on a little train and a mini cruise on an underground lake. Isango sells the trip for £49.

Lake District: A half-day bus tour around Salzburg’s neighbouring lakes and mountains takes in picturesque villages St Gilgen and St Wolfgang, with a boat cruise on Lake Wolfgang thrown in between April and October. Do Something Different sells it for £46.

The ice cave: High on a mountainside above the town of Werfen is the Eisreisenwelt – supposedly the world’s largest accessible ice cave. Tours show off stalagmites, stalactites and flow formations, all covered in sparking blue-white ice. Viator sells a half-day trip for £70.

The best things to see, do and eat in Innsbruck, Austria
Explore Paris off-peak to avoid the summer crowds
Prague neighbourhoods: Go beyond the Charles Bridge