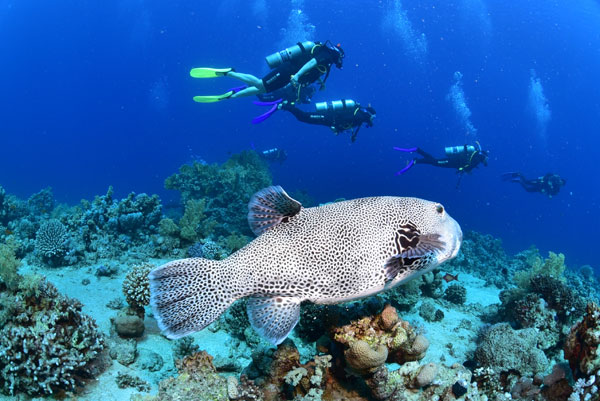 This Red Sea resort is a diver’s dream, and its marine life has never been better, reports Sarah Marshall.

Most colours disappear the deeper you go, but even 15 metres below the surface, Egypt’s Red Sea was an artist’s palette of electrifying Pantones. Soft corals and writhing anemones popped with vibrant hues, and clouds of Calippo-orange anthias fish were testimony to a healthy reef.

It’s a rare picture of positivity on our ailing blue planet, and one painted by the very absence of human hand.

Sharm el-Sheikh has long been a gateway to some of the world’s great aquatic wonders, but a crash in visitor numbers has given its precious reefs an opportunity to revitalise. I flew here with Tui on the first scheduled direct flight to operate from London since the Foreign Office lifted its flight ban last October, following a four-year hiatus triggered by a terrorist attack on a Russian plane in 2015.

“Soft corals and writhing anemones popped with vibrant hues, and clouds of Calippo-orange anthias fish were testimony to a healthy reef.”

The mood was enthusiastic: from dive instructors to bartenders, everyone was eager for British holidaymakers to return, albeit before the coronavirus crisis put a pause on that nascent recovery. And while resorts were much quieter than previously, the waters lapping the southern tip of the Sinai Peninsula were teeming with life.

“The diving here is exceptional,” says Ahmed Sayed, Middle East regional manager for diving industry body Padi, whose courses are taught at several dive clubs in Sharm, including the Reef Oasis Blue Bay Resort and Spa. Beginners are eased in with lessons in a swimming pool, but it’s the warm, calm sea that promises the most excitement. 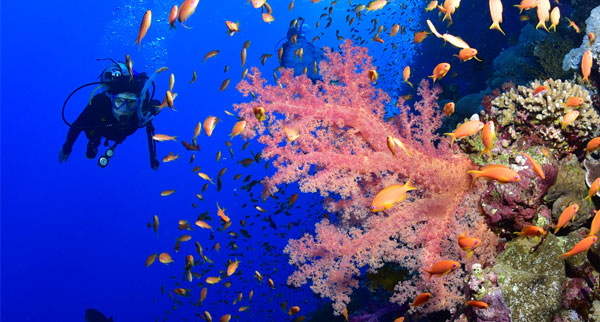 A giant moray eel and thick-lipped humphead wrasse were highlights of the house reef, then a boat trip to the Straits of Tiran revealed eagle rays gliding through the water like sails at full mast.

But Ras Mohammed National Park is undoubtedly this region’s jewel. At Yolanda and Shark Reef, I hung weightlessly alongside an endless wall of corals, peeping into gelatinous castles guarded by territorial clownfish and wafting past towers serenaded by sea fans so delicate they might have broken with even a breath. Lost cargo from a shipwreck provided light amusement in the form of scattered toilet seats.

“I hung weightlessly alongside an endless wall of corals, peeping into gelatinous castles guarded by territorial clownfish and wafting past towers serenaded by sea fans.”

Although there have been no official studies, anecdotal evidence suggests marine life has never been better – and with a ban on offshore introductory dives and Padi’s ocean clean-ups, the aim is to keep it that way.

An hour north in Dahab, I dived one of Jacques Cousteau’s favourite sites, Canyon, where I dropped through a chasm in the seabed. At the surface it was raining, forming a rainbow – a rarity in the desert – but although remarkable, it was a shadow of the spectacle below. You need only dip beneath the waves to find Sharm’s enduring pot of gold.

Dive-certification organisation Padi offers advice about diving in Egypt and other destinations.
travel.padi.com

Tui offers seven nights’ all-inclusive at the 5T Reef Oasis Blue Bay Resort and Spa, in Sharm el-Sheikh, from £997, including flights from Gatwick on October 20, 2021, and transfers.
tui.co.uk

Undiscovered diving spots in the Caribbean
Three ways to experience the Maldives Family, couples and diving
Sail from Luxor to Aswan on a Nile river cruise