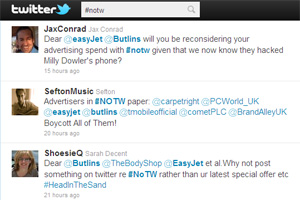 Travel firms have been drawn into the controversy over the News of the World phone-hacking allegations surrounding the Milly Dowler case.

Members of Twitter have used the #notw hashtag to mount a campaign urging advertisers to reconsider their spend with the tabloid. Some Twitter users have even called on the public to boycott companies that advertise in the News of the World.

A selection of advertisers faced the same tweet: “Will you be reconsidering your advertising spend with NOTW now we know they hacked Milly Dowler’s phone?”

The Co-operative Group, First Choice, Butlins and easyJet have all been targeted. Travel Weekly has asked all the travel companies involved for a response to the Twitter campaign.

The Co-operative Group spokesman said: “These are allegations. We have no plans to withdraw our advertising.”

A Tui Travel spokesman said: “Thomson and First Choice will not be changing their advertising schedule.”

At the time of going to press, Travel Weekly had been unable to get a response from the other companies. However, Ford said it would be pulling its advertising until the outcome of a News of the World investigation into the hacking scandal, while Halifax, Npower and T-Mobile confirmed they were reviewing their advertising spend.

The Guardian newspaper claimed on Monday that a private investigator working for the News of the World had hacked into Milly Dowler’s voicemails after her disappearance in 2002.

The report alleged some messages were even deleted to free up space in the voicemail, potentially giving the impression she was still alive.

The trial of bouncer Levi Bellfield heard last month that she had been murdered moments after going missing. Bellfield was given a life sentence.

Danny Rogers, editor of PR Week, said: “Travel brands will have to decide where they stand on this. If they do pull their advertising, that will have a lot of influence on the News of the World and put pressure on Rebekah Brooks.”