With demand on the rise for holidays that don’t require a flight, Laura French hunts down alternative ways to travel.

With travel corridors opening up the summer season and many airlines having now resumed services, flying is officially back on the cards.

But for those less confident about taking to the skies just yet, there are plenty of alternatives – and we’re not just talking about a booze cruise to Calais. From coach tours to Croatia to rail breaks to Greece, ferry holidays to Spain and train tours to Venice, there’s plenty of product out there for clients wanting to get a little more adventurous and explore parts of the continent they might never have thought of before, all without requiring a runway.

Ireland: From the Cliffs of Moher plunging into the ocean to the Ring of Kerry and its silvery mountain landscapes, the Emerald Isle sells itself. There’s plenty to see in Dublin alone but it’s not only the city that lures, with the 1,600-mile long Wild Atlantic Way welcoming drivers after a scenic, windswept coastal route and a plethora of heritage-filled villages to stay in. For one of the most quintessential, Irish Ferries recommends Dunmore East, a fishing village in County Waterford just over an hour’s drive from Rosslare, where ferries dock.

Book it: P&O Ferries has an eight-hour service from Liverpool to Dublin. Irish Ferries runs from Holyhead to Dublin and Pembroke to Rosslare in around three hours. A week at the four-star Sea Cliff Holiday Homes in Dunmore East costs from £930 per family in August (kids stay free).
irishferries.com 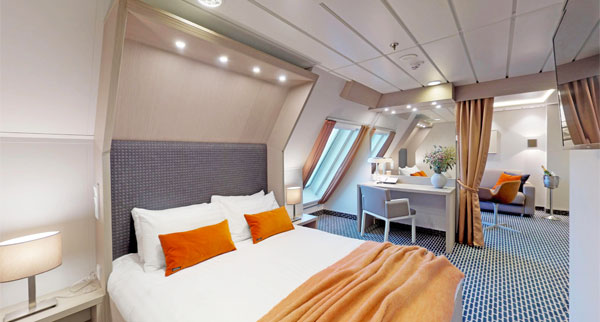 Brittany: There’s plenty to draw travellers across the Channel, and it’s not only Calais that’s reachable by ferry, thanks to services from Poole and Portsmouth to Brittany (with Condor Ferries and Brittany Ferries). Gold-sand shores, rugged coastal walks and quaint fishing harbours come together in this diverse region and at its heart is Saint Malo, where medieval ramparts frame a postcard-pretty old town and port that hides a swashbuckling, pirate-filled past. Beyond the city there are islands, forests and a handful of quieter spots to explore, including Dol de Bretagne, famous for its 13th-century cathedral and its still-standing medieval houses.

Book it: Brittany Ferries offers a week at the quaint three-bedroom La Fresnais gite in Dol de Bretagne (close to Saint Malo) from £721 for up to five travelling, including ferry travel.
brittany-ferries.co.uk

Jersey: There’s no time like the present to sell Britain’s smattering of islands, and at just over four hours by ferry from Poole, oft-underrated Jersey deserves a spot on the list. Rugged coastlines, soft-sand beaches, a laid-back atmosphere and an abundance of historical sights make the island an excellent bet for families as well as older travellers, while the annual Tennerfest draws foodies each October.

“Rugged coastlines, soft-sand beaches, a laid-back atmosphere and an abundance of historical sights make the island an excellent bet for families.”

For clients keen to go farther afield, Brittany Ferries sails overnight from Portsmouth to Bilbao and Santander, its biggest growth area in recent years offering access to the less-visited north of Spain

“Our research, conducted a couple of weeks ago, suggests 73% of people want to get away this summer, with over half saying they’ll be looking to travel within the British Isles and 27% to Europe.

Last year, destinations such as France, Ireland, Scotland and the Netherlands were all popular with holidaymakers, and we saw growth in the number of people travelling to the Isle of Wight, Isle of Man, the Isles of Scilly and the Channel Islands.

Ferry travel is an excellent way of reaching places that are a little off the beaten track, and it lends itself well to social distancing, with wide public areas, open deck space and private cabins on certain routes. Our members have introduced Covid-safe protocols including staggered boarding, reduced passenger capacity, additional cleaning and social distancing signage to ensure passengers and crew are able to travel as safely as possible.” 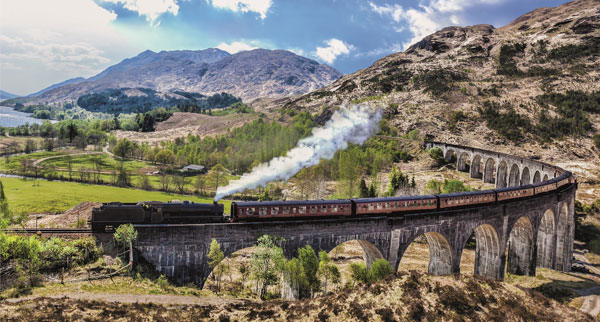 The Netherlands: With the Eurostar whisking passengers over to both Amsterdam and Rotterdam in less than four hours, the Netherlands is an obvious choice for a quick getaway that blends laid-back vibes with cycle-friendly countryside and colourful coastal resorts. The beaches of The Hague can be reached in less than 30 minutes by train from Rotterdam, while cultural attractions aplenty can be found in Utrecht, a 20-minute ride from the capital – so you needn’t only limit it to the ‘dam.

Book it: If clients are interested in combining the Netherlands with neighbouring countries, suggest Insight Vacations’ 11-day Country Roads of Belgium, Luxembourg and the Netherlands tour, which can be done by Eurostar. Prices start at £2,695 (excluding Eurostar, with departures from September).
insightvacations.com

“The beaches of The Hague can be reached in less than 30 minutes by train from Rotterdam, while cultural attractions aplenty can be found in Utrecht.”

The Swiss Alps: With its snowy peaks, pine-forested slopes and timber-chalet villages, Switzerland seems to have been made for slow, serene rail trips. Great Rail Journeys has an eight-day itinerary from London, with highlights including three nights in Chur, Switzerland’s first settlement; a ride on the 100-year-old Bernina Express through the Engadine Valley; and a trip on the Glacier Express, where rolling vineyards, dramatic peaks and traditional mountain villages flash past the window pane.

Book it: Great Rail Journeys’ Traditional Glacier Express trip costs from £1,496 per person including accommodation, some meals and all transport, departing October 3.
greatrail.com 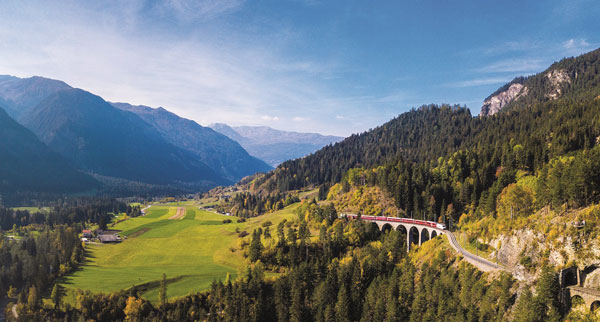 Greece: If you thought a trip to Greece required a flight, think again; Sunvil has introduced independent rail itineraries to Corfu, Paxos, Lefkas, Parga and Sivota. Clients opting for one of the itineraries will travel from London St Pancras through France, the Alps, Milan and Bari, where they’ll catch a ferry to Igoumenitsa or Corfu (both around eight hours) for a week-long dose of cerulean sea and deserted beaches. “The journey is a mini adventure in itself, with an opportunity to stop and explore multiple places en route,” says Dudley der Parthog, Sunvil director for Greece.

“If you thought a trip to Greece required a flight, think again; Sunvil has introduced independent rail itineraries to Corfu, Paxos, Lefkas, Parga and Sivota.”

Book it: A nine-night Corfu by train itinerary costs from £1,500 per person, including one night’s B&B at the De La Ville Hotel, Milan, and seven nights’ self-catering at the Kalami Bay apartments, Corfu, plus Eurostar, rail journeys, overnight ferry and a flight for the return.
sunvil.co.uk

Anna Davies, sales and marketing manager for the UK, Railbookers 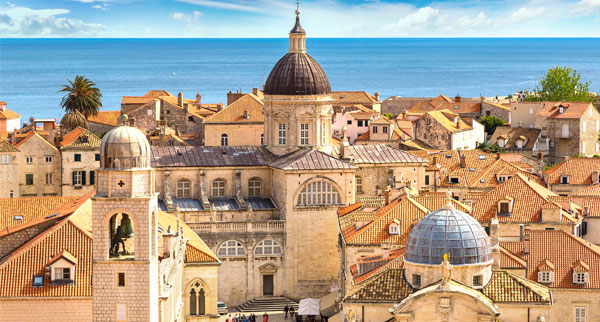 Croatia: It’s hard to beat a coach tour for lack of hassle factor, and operators have been getting ever-more adventurous in terms of destinations in recent years. Just Go Holidays and Leger Holidays both offer trips from the UK to Croatia (which is on the UK’s travel corridors list), adding another way to sell an already-enticing mix of culture-filled cities and castaway islands.

Suggest Leger’s Dubrovnik and Jewels of the Dalmatian Coast for a comprehensive tour of the highlights, including the capital and its stone-walled Old Town, plus Split, Sibenik, Krka National Park and Plitvice Lakes, where vivid turquoise lagoons glow out from the foliage, and waterfalls plunge into the pools below.

“There’s something pretty special about the Tyrol, with its mirror lakes and flowering meadows, soaring peaks and icy slopes.”

The Austrian Tyrol: There’s something pretty special about the Tyrol, with its mirror lakes and flowering meadows, soaring peaks and icy slopes, and it’s even more enchanting in the autumn months when the trees turn copper and the air turns crisp. Grand UK Holidays has an eight-day autumn tour taking in the best of the region with visits to Kitzbuhel, Rattenberg, the Ziller Valley, Grossglockner Glacier and beyond from a base in Hohe Tauern National Park, where mountains and waterfalls are sure to astound at every turn.

Book it: The Tyrolean All-Inclusive trip costs from £769 per person including accommodation, coach travel, ferry crossings, all meals and house drinks, with various pick-up points in the UK, departing September 26.
grandukholidays.com

The Italian Riviera: Exceptional food, picturesque villages and charming seaside towns come together in the Italian Riviera, typified in glamorous Portofino, where swanky yachts bob beside pastel-hued houses, and Cervo, where coffee shops and galleries line historic cobbled streets. Just Go Holidays combines both with explorations in Monaco, Monte Carlo, Nice and beyond on a 10-day coach trip from the UK that takes in both sides of the Italian-French border from a base in Diano Marina, throwing in all the glitz and glamour you’d expect from these legendary coastlines.

Book it: From £699 per person including accommodation with daily breakfast and dinner, local drinks, coach travel, ferry crossings and excursions, for departures June to September 2021.
justgoholidays.com

Intrepid Travel has introduced Intrepid Retreats, a new range of single-centre trips in places reachable by car or a short flight. Itineraries include the Peak District, Cornwall and Glencoe, plus Iceland, Turkey, Italy and Croatia.
intrepidtravel.com