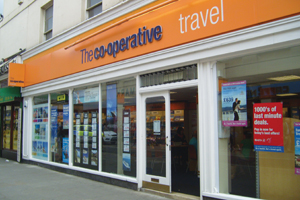 The Midcounties Co-operative is planning to almost treble its retail network to about 100 branches and is also looking to expand its homeworking team.

Midcounties is not joining The Co-operative Travel and Midlands Co-op in the retail joint venture with Thomas Cook. It believes there may be opportunities to add to its 35 branches as the new merged group reviews its combined portfolio.

Sue Reid, travel general manager at Midcounties, said: “We are a year into a three-year plan, and we have a target of around 100 branches both on the high street and in-store [within food shops].

“We have identified room for growth around our key airports – Birmingham and East Midlands – and also along the M40 corridor.”

Midcounties has segmented its shop network as mainstream, mainstream-plus and luxury branches, and expansion into affluent areas along the M40 corridor could allow growth in the latter segments.

“Our existing contract with The Co-operative Travel Trading Group runs until March 2012, so we will be looking at the structure of the joint venture and how we will approach our own commercials in the future”.

She added: “We are looking at all options, and that includes the consortia route or operating as a standalone business.”

Reid said discussions were ongoing about how Midcounties would be branded, with the need to differentiate from the Co-operative businesses within the joint venture and to reiterate Midcounties’ independence. The majority of Midcounties’ shops are currently branded as The Co-operative Travel.