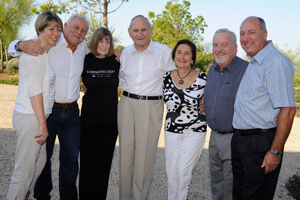 Worldchoice chairman Colin Heal announced that he was stepping down from the role amid emotional scenes at the weekend’s annual overseas conference in Spain.

The former Royal Air Force group captain (pictured, centre) will continue as honorary lifetime president and will also continue to liaise with trade association Abta on behalf of Worldchoice members.

In addition he is on the board of Abta industry charity Lifeline, formerly the Benevolent Fund, which he requested was given a donation by Worldchoice to mark his stepping down as chairman.

Heal, one of the sector’s elder statesmen and the original architect of the Worldchoice consortium, was given a standing ovation when the news was announced at the conference’s gala dinner on Saturday night.

He said he was proud that the consortium had to date raised more than £50,000 for Abta Lifeline, more than any other single organisation.

Speaking to Travel Weekly after the announcement was made, Heal said he had been lucky enough to have had three separate careers, in the oil industry, in the RAF and finally in travel.

“Because I have had these different careers I known that change comes about, that’s what happens in life.

“I thought this was a good time to stand down with lots of changes going on and new people coming in to the organisation and needing to build their profile.

“I thought I’d done pretty much all I could. I deliberately stayed on for three years after the merger [with the Travel Trust Association].

“In times like this true character shows through and those who are determined to see this through will find innovative ways of ensuring that they ride through this economic crisis.”

Heal said one of his proudest achievements was overseeing the merger with the Travel Trust Association.

And he said his biggest regret was the demise of the Triton superconsortium forged between Advantage and Global Travel Group six years ago when Tui Travel moved to 7% commission.

“I think it was a great concept and enormous value to the independent sector. It has the potential to develop into something even greater.

“I think everyone agrees it was a good idea. It’s really hard to put ones finger on why it is no longer in existence, it was combination of circumstances that caused it to stop functioning.

“I would hope that in time other leaders will again take up the challenge of bringing the independent sector together as whole. I think that’s very important.”