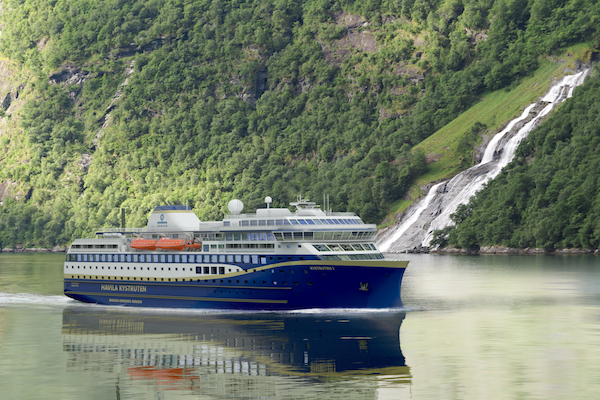 The twin launch of the 6,200 ton vessels took place at the Tersan shipyard in Turkey on Saturday.

But the first two ships will not be ready for the new year as originally planned as the coronavirus pandemic has affected the shipyard over the last six months.

Delivery may now take place during the first quarter of 2021,”based on current knowledge,” according to Havila Voyages’ chief executive Arild Myrvoll.

In anticipation of the new 179-cabin ships, the firm has received approval for two replacement vessels.

But demand for the coastal route between Bergen and Kirkenes is currently “very uncertain”, and the need for capacity at the start of the new contract on January 1 is under evaluation, the company disclosed.

The coronavirus pandemic and travel restrictions are affecting the entire travel industry and are also making it difficult for Havila Voyages to be specific about what will happen next year.

“But we are pleased to note that there is a lot of interest in Havila Voyages from travel agencies and tour operators. We are in great demand and are looking forward to getting going,” Myrvoll added.

The ships have been on land for longer than usual to expedite the construction process as much as possible, with several tasks streamlined.

Myrvoll added: “This means that the work on the ships that have been launched is well underway with regard to plumbing, machinery, electricity and fixtures and fittings.

“It will be good to start providing people living along the coast, and tourists, with safe transport and environmentally friendly sailing on the world’s most beautiful coastal voyage.”

They will be the most environmentally friendly ships on the coastal route between Bergen and Kirkenes from 2021, the company claims.

The batteries will enable them to run for four hours without creating noise or emissions.

Havila Voyages has an agreement with the Norwegian transport ministry to operate four of the 11 ships that sail the coastal voyage between Bergen and Kirkenes from 2021 to 2030.