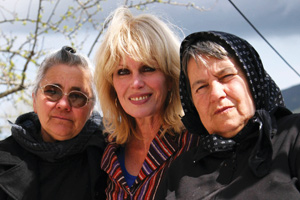 Greek operators are expecting a new TV programme starring Joanna Lumley to provide a much-needed boost to holiday sales as the country struggles with strikes and economic turmoil.

The first episode of travel documentary Greek Odyssey aired on prime-time ITV1 October 13 and operators are already hailing the programme as a saving grace for the Greece market.

In the series, the actress visits historic sites of the Greek empire, explores the destination’s diverse cultures and meets local people.

Operators said the programme could do the same for Greece as another Lumley documentary, In the Land of the Northern Lights, did for Sweden and Norway. Cruise operator Hurtigruten said that programme prompted an 80% rise in reservations for its northern lights programme.

Sales and marketing director Kathryn Beadle said: “When customers see it on TV, they want to experience it themselves.”

Rob Goodwin, Cosmos head of product and commercial for the eastern Mediterranean, said the programme would help educate consumers about the “real Greece”.

“This will have a massively positive impact on people’s perceptions of Greece. It shows how diverse each island is and that there’s so much more than standard beach holidays,” he said.

Cosmos has already seen increased demand for Greece for 2012 and has doubled its Greek programme, focusing on lesser-known resorts and islands.

“This programme shows Greece is not all about economic doom and strikes in Athens,” he said.

“What is happening now is temporary – one should look at the context of what Greece has contributed to the world in terms of culture, politics and philosophy. One should appreciate the real Greece.”