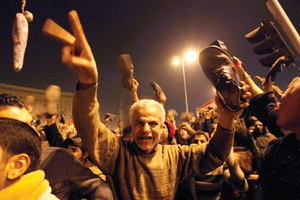 Unrest in Cairo is expected to escalate today with calls for a mass demonstration by anti-government protestors in Tahrir Square.

The move comes a week after protestors took to the streets in an uprising against Egypt’s military rulers ahead of the first round of parliamentary elections on Monday.

Foreign & Commonwealth Office travel advice remains unchanged but there are warnings that demonstrations could occur in other areas of Cairo, Alexandria and other cities in Egypt.

There are also reports of a march to the ministry of defence in the Abbasiya district of the Egyptian capital.

The FCO, urging Britons to stay away from Tahrir Square and the downtown area of Cairo, said there had been reports of “dangerous forms” of gas being used against protestors as well as live ammunition.

More than 35 people have been killed, mainly in Cairo, and over 1,800 injured in the past week.

Foreign Secretary William Hague said: “I am deeply concerned by the unacceptable violence and loss of life which has taken place around Tahrir Square in Cairo and other parts of Egypt.

“I am particularly concerned by reports of dangerous forms of gas being used against protestors as well as live ammunition.”