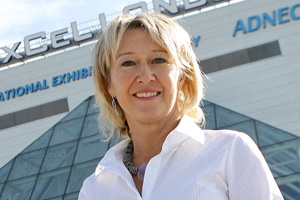 Fiona Jeffery was appointed OBE in the 2012 New Year Honours list. She shares the secrets of her 25-year WTM career with Juliet Dennis.

Did you ever imagine you might receive an OBE?

It was a complete bolt out of the blue. I received the letter in November and it was written in such a way that I thought I had been nominated for something so I just put it on the side. It was only a few weeks later my husband read it and said: “You’ve got to be joking!”. He was the one who told me I’d got an OBE.

What’s nice about the OBE is that it’s a reflection of all the team’s work at Reed Exhibitions. Their involvement has been recognised and this is what makes me really proud. The OBE also recognises what events can achieve if they embrace an industry.

What achievements are you most proud of in your career?

I’ve taken a lot of satisfaction from bringing together the world of travel at WTM. It started on a business basis, but I have looked to extend it beyond that. WTM is more about thought leadership and strategic development within the industry and a catalyst for debates, such as the Ministers’ Summit.

When we embarked on WTM’s environmental initiative 18 years ago I was a lone voice. It took 12 years to get the issue moving and we launched World Responsible Tourism Day at WTM five years ago.

What have been the biggest challenges in your career?

I started the Just a Drop charity in 1998 and it is one of the most challenging things I have done. You tend to have a greater sense of responsibility when dealing with personal or corporate donations. The biggest challenges for WTM were moving it from Earls Court to ExCeL in 2002 – the industry was really against it and thought we were taking WTM to a Siberian wasteland – and running WTM just a few weeks after the 9/11 attacks.

Everyone thought we were going to cancel it so we had to fight really hard to keep it. We rewrote the whole agenda after the terrorist attacks and it helped the industry by bringing everyone together.

What’s driven you to achieve so much in the travel industry?

I have always wanted to do what I do well and make it count. The truth is I have never been an ambitious person. There are two things that have been drivers for me: a fear of failure, and not wanting to let myself or other people down.

I have got a strong work ethic from my parents. From the age of six I dreamt of being a doctor – my dad was a doctor but he told me I didn’t have the stomach for it!

How have you juggled home and work life?

I had help, a full-time nanny, when the kids (Cameron, 18, and Lauren, 14) were young and a very good husband. The biggest challenge is trying to do both and getting the feeling you never do either of them well. If I am honest I have always struggled with it and I still struggle. You end up working odd hours; I used to come home and put the kids to bed and go back to my desk at 8pm.

My husband sacrificed a lot of his business potential to enable me to meet the demands of the corporate environment. My kids did say at one stage they would like it if I was less stressed, and so a few years ago I went part-time – but I still work every day. What I didn’t want was to feel I had been successful in my career but hadn’t spent any time with my family.

What advice would you give to other women in the industry?

Be true to yourself and recognise what you are good at. One of the things I’ve enjoyed most is working with great people and bringing out the best in them. You cannot do it avll on your own. There is no limit to what can be achieved if you do not mind who takes the credit. Where there’s a will, there’s a way – just do it nicely.