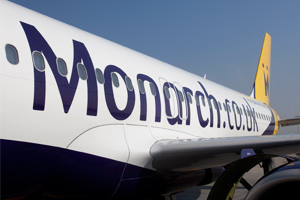 Monarch is stepping in to fill the void left with the closure of loss-making Bmibaby with plans for a new base at East Midlands airport and expanded services from Birmingham.

The schedule leisure carrier is to open a new base at East Midlands from late summer by launching flights to holiday destinations, including Malaga, Alicante, Palma and Faro.

Monarch will expand operations from Birmingham by adding frequency on existing routes to Malaga, Alicante, Faro, Rome and Palma and start flights to Barcelona.

The move came as Bmibaby confirmed that all flights to and from Belfast will cease from June 11. Services from East Midlands to Amsterdam, Paris, Geneva, Nice, Edinburgh, Glasgow and Newquay, and from Birmingham to Knock and Amsterdam, will end on the same day.

The airline will be completely grounded from September 10 after new owner, British Airways parent IAG, failed to find a buyer for the BMI budget subsidiary.

BMI interim managing director Peter Simpson said: “We recognise that these are unsettling times for Bmibaby employees, who have worked tirelessly during a long period of uncertainty.

“Bmibaby has delivered high levels of operational performance and customer service, but has continued to struggle financially, losing more than £100 million in the last four years. In the consultation process, we will need to be realistic about our options.

“To help stem losses as quickly as possible and as a preliminary measure, we will be making reductions to Bmibaby’s flying programme from June.

“We sincerely apologise to all customers affected and will be providing full refunds and doing all we can with other airlines to mitigate the impact of these changes.”

BMI said progress has been made with a potential buyer for BMI Regional.

Monarch managing director Kevin George said: “In light of recent industry changes, opportunities have opened up in the market.

“It has become clear that the Midlands will be underserved as a region in the future, and that there is a lack of quality carriers to serve customers travelling from the area.

“As an airline with over 40 years heritage and a stronghold in the Midlands already, the expansion of our existing services from Birmingham and the launch of operations from East Midlands makes perfect sense for Monarch, and accelerates the strategy we announced last year to focus on the development of our scheduled operations into key leisure destinations across the Mediterranean, the Canaries and North Africa.”

He added: “The further expansion of our services from the Midlands will provide even more customers in the Midlands with choice and flexibility and protects jobs at East Midlands airport in the future,”

Ryanair stepped in with £29.99 one-way ‘rescue fares’ for Bmibaby passengers who have had bookings from Belfast and Birmingham cancelled, to corresponding destinations on flights to/from Londonderry, Dublin and East Midlands airports. The fares are available until May 20 and cover travel between June 11 and October 27.

Ryanair said it has been working with IAG to facilitate Bmibaby passengers with bookings to/from Belfast and Birmingham on Ryanair flights from:

A spokesman said: “Ryanair is offering to rescue the summer travel plans of passengers who have had their Bmibaby flights to/from Belfast and Birmingham cancelled by allowing them to reach their final destination on Ryanair flights from Derry, Dublin or East Midlands at fares from just £29.99 one way.

“Ryanair will facilitate Bmibaby passengers in any way we can and passengers can book these flights until May 20 on ryanair.com/member/ryanairbmibabyfare.html.”