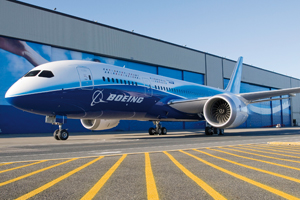 Boeing intends to deliver more than 60 Dreamliners to airlines this year despite the aircraft being grounded since mid-January by the US Federal Aviation Administration (FAA).

That may offer little comfort to Thomson Airways as it awaits delivery of its first 787 next month.

The FAA grounded the aircraft following a fire on a Japan Airlines 787 at Boston and an emergency landing by an All Nippon Airways (ANA) 787 in Japan.

Boeing has suspended deliveries while investigations proceed in the US and Japan, focused on the lithium-ion batteries used as part of the 787’s power system.

However, Boeing chairman and chief executive Jim McNerney said yesterday: “Production of the 787 continues as planned. We remain confident in the integrity of the programme and the safety of the aircraft.”

He told analysts: “We will get to the bottom of this and restore confidence.”

McNerney was speaking as Boeing presented full year results and guidance for 2013, with the company reporting 2012 was its second-best year ever for orders and deliveries.

However, he did so as the two Japanese carriers involved revealed they had repeatedly changed the 787 batteries which are the focus of investigation.

ANA said it had changed the batteries 10 times because of problems in advance of the emergency landing this month.

McNerney refused to comment on speculation the aircraft could be grounded for an extended period as investigators have so far failed to identify the cause of the problem.

He said: “We can’t predict the outcome. We are making progress. We have every expert in the world looking at this issue. Our plan is to continue production of the 787.

“I can’t talk about particulars of the investigation. But I am confident we will identify the root cause of these incidents. When we have the answer we will act on it.”

Thomson Airways, part of Tui Travel, is awaiting news of the investigation with special interest. It is set to be the first UK airline to operate the 787 and was due to take delivery of its first Dreamliner in late February.

Boeing declined to comment on deliveries to specific customers, but a February delivery appears highly unlikely.

McNerney said: “We are limited in what we can say. We deeply regret the impact on customers.”

Thomson has also declined to comment on the delivery date until it receives notification of any changes from Boeing.

However, McNerney revealed Boeing plans to increase production of the 787 from the current five a month to seven a month by mid-2013 and to 10 a month by the end of the year.