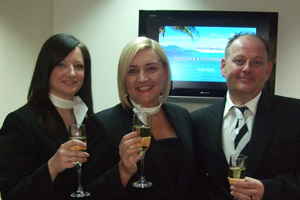 A former Bowen Travel Group branch manager has opened  her own agency in the premises  of her former shop.

Just a week after Bowen Travel Group collapsed last October, Elizabeth Rick set about finding a way to reopen an agency on the same site in Brigg, north Lincolnshire.

Rick, a mum-of-two who started her career as a Lunn Poly agent at 16, said:  “I was devastated when Bowens collapsed. We really knew our customers and were on first-name terms. We just wanted to come back to work in the same place.”

Rick contacted a local businessman who agreed to become a silent partner as a 50% shareholder. She secured the original premises after discussions with the administrators for Bowen.

New shop features include a sofa and TV for customers to watch holiday clips while waiting in the store and a monthly customer event in conjunction with specific suppliers.

The shop also now takes calls out of hours, redirected to Rick’s mobile, to ensure it  does not lose any business.

Rick, who has never owned a business before, added: “We have contacted previous customers and so far it’s been really busy. “I’ve been working six days a week until 9pm and weekends.”