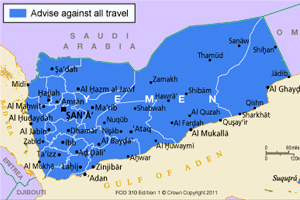 The closure of the British embassy in the Yemeni capital Sana’a has been extended until the end of the Muslim festival of Eid later this week, the Foreign & Commonwealth Office says.

The mission was to reopen on Tuesday after a two-day shutdown over fears of a terrorist attack.

No exact date for its reopening has been given, the BBC reported.

The US said 19 of its embassies in North Africa and the Middle East would stay shut until Saturday.

US officials met in Washington over the weekend to review the threat of a terrorist attack that led to the closure of embassies and consulates and a global travel warning to Americans for August.

An FCO spokeswoman said: “Due to continuing security concerns the British embassy in Yemen will remain closed until the end of Eid.”

Eid, which begins on Wednesday evening and runs for 24 hours, marks the end of the Muslim holy month of Ramadan, and UK officials had advised particular vigilance saying “tensions could be heightened”.

The FCO advises against all travel to Yemen and is strongly urging British nationals to leave immediately.

It says there is “a high threat from terrorism throughout Yemen” and “a very high threat of kidnap from armed tribes, criminals and terrorists”.

The amended FCO advisory says: “If you don’t leave the country now while commercial carriers are still flying it is extremely unlikely that the British government will be able to evacuate you or provide consular assistance.”