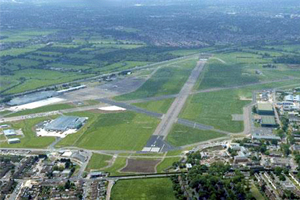 A temporary plan to relieve Heathrow’s capacity crunch by turning RAF Northolt into a base for short-haul flights has been put forward to the government’s Airports Commission.

A former commander of the military base claims its runway could be extended so its can handle short-haul passenger aircraft.

A rail link would connect the two airports with a journey time of 15 minutes.

The £3 billion scheme for Northolt could be operational by 2018, providing a stop-gap until a third runway is built seven  miles away at Heathrow.

But Heathrow said the plan was unworkable, and would struggle to be operational by 2018 because of the likelihood of a planning inquiry, the Financial Times reported.

Rothwell Aviation, a company set up by former RAF officer Gerry Bunn, said an expanded Heathrow could not be realistically operational until the early 2030s.

Bunn, who was Northolt’s station commander in 1990 and worked there in the 1970s, said the airfield’s single runway could be repositioned and extended to 2,400 metres to support mainstream short-haul aircraft such as Airbus A320s and Boeing 737s.

Rothwell estimates that using Northolt in this way would enable 80,000 short-haul flights a year, on top of the 480,000 permitted at Heathrow.

Heathrow Airport Holdings, the airport’s owner, said splitting operations between the hub and Northolt would not work at a practical level.

Government-owned Northolt is currently used by the RAF and small business jets.