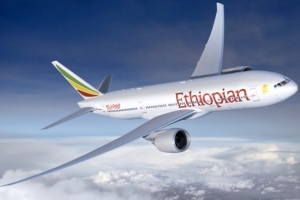 Ethiopian Airlines has shown confidence in the Boeing 787 by proceeding with an order for eight more despite one of its Dreamliners catching fire at Heathrow last month.

The fire was traced to a transmitter located in the upper rear part of the aircraft used to locate aircraft after a crash.

It occurred while the aircraft was parked at the airport.

“I have strong confidence in this airplane. It is the future in aviation,” he said after the airline announced a near tripling of net profit.

Tewolde said the Ethiopian carrier, which has five Dreamliners, was negotiating compensation with Boeing but gave no details.

Asked if there were plans for more orders, Tewolde said: “We are evaluating more orders but Boeing is also busy until 2018 onward.”

Operating revenue at Ethiopian Airlines climbed to 38.5 billion birr in 2012/13 from 33.8 billion a year earlier. Operating profit rose to 2.7 billion birr ($142.85 million) from 1 billion, helped by growth in its fleet, destinations and passenger numbers.

It wants to expand its fleet to 112 aircraft from 60 and carry 18 million passengers over 92 routes by 2025, Reuters reported.

The airline is one of the biggest on the African continent.