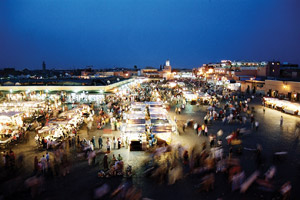 Morocco’s new tourism chief has pledged to double UK visitor numbers to 1 million by 2016, thanks to growing airlift and a focus on the golf and MICE markets.

The number of direct flights to the North African country will jump this winter from 58 to 72 services each week, including a new easyJet route from Bristol to Marrakech, an increase in British Airways services from daily to 10 per week, four flights from Royal Air Maroc to Marrakech and Casablanca, and a Ryanair flight to Rabat.

Monarch will also bring in twice-weekly services to Agadir from London Gatwick and Manchester starting in May 2014.

Abderrafie Zouitene, the recently-appointed chief executive of the Moroccan National Tourist Office, said: “I think the potential is huge from the British market. We are going to have half a million UK visitors this year, but our objective is to reach 1 million in the next three years.

“We have to do more to make Casablanca, Tangier and Ouarzazate well-known, because for the British market, it’s just Marrakech.”

He added that increased airlift would contribute to an overall rise of 60% in capacity from Britain to Morocco over the next two years, compared to a 30% increase from the rest of the world.

The tourism authority will be embarking on joint marketing campaigns with its airline partners to promote other destinations within Morocco as well as niche markets such as golf.

MNTO UK and Ireland director Amine Boughaleb added: “Our aim here is to try to raise awareness of other cities – it’s not only Agadir and Marrakech. We are trying to create new routes to these cities. For example, in Ouarzazate, there are a lot of places for trekking and rafting, so we are approaching a lot of sports and adventure operators.

“Our aim is to be within the top five destinations for golf for British tourists.”

The number of golf courses in the country is set to increase from 35 to 50 within the next two years, while other infrastructure developments include a high-speed train link opening between Casablanca and Tangier in 2016.