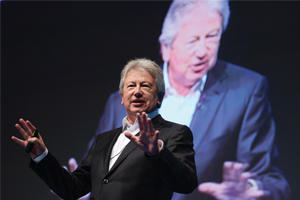 Investment in overseas markets is starting to pay off for Travel Counsellors, which saw a £40 million increase in business transacted in the year to October.

Conference delegates were given a trading update by managing director Steve Byrne (pictured).

Total transaction value rose to £390 million for the 12 months to October 31, of which £105 million was from overseas markets. Gross profit margin was flat but costs had reduced.

Byrne said: “We’d had to scale up costs for expansion overseas; now we are not having to do that because those markets are settled and growing.”

When all bookings are taken into account, including those for departures in the current financial year, the business grew 13% globally and 15% in the UK.

“The UK market has been a little more positive, but no one would say it is buoyant,” said Byrne.

“Amid all the talk about online, multi-channel distribution and winning business on price, our travel counsellors have seen a 10% increase in income. If you give clients care and service, they do not want to use online booking tools and are happy to use their travel agent.”

Byrne said one in three of the company’s clients was a return customer.

The proportion of agents leaving remained stable at 10% but a busy year for recruitment saw UK numbers grow from 730 to 800.

The proportion of Travel Counsellors’ business not reliant on third-party tour operators was in the majority for the first time last year.

The conference heard that 52% of business transacted involved agents setting their own margins by making use of the agency’s in-house Phenix dynamic packaging system.

Commercial director Kirsten Hughes said: “To protect your business and earn the margin you deserve, how you buy the product is as important as how you sell it.”

“We are constantly working on improving Phenix further to maximise its potential for our travel counsellors and enable them to take control of their margin and build flourishing businesses,” he said.

Travel Counsellors’ decision to opt to stick with Travelport as its GDS provider hinged on the technology provided by the UK market leader.

Byrne said the firm spent six months undertaking a detailed evaluation of its options before striking a single five-year deal covering all of its markets globally for the first time.

He said commercial inducements were irrelevant in the decision, which was based on whether the technology could support the agency’s growth, particularly in the corporate travel sector.

“We were pleased with what we saw from all the GDSs,” he added.

“But Travelport showed us more in terms of technology, account management at a global level and a willingness to adapt the product.

“It was really important from the business travel point of view that the technology and functionality was there not just for now but for the next three to five years.”

The deal will see Travel Counsellors’ agents be upgraded to the Travelport SmartPoint desktop and use the Travelport Mobile Agent interface, giving them access to its services on handheld devices.