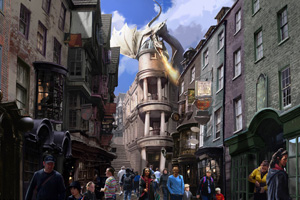 Universal Orlando Resort has unveiled details of a new attraction at the Wizarding World of Harry Potter, which is due to open this summer.

Diagon Alley, in Universal Studios Florida, will feature shops and restaurants in addition to a central “multi-sensory, multi-dimensional” attraction called Harry Potter and the Escape from Gringotts.

Guests will enter through an area themed around modern-day London, and there will also be a parallel area, called Knockturn Alley, which will showcase the “darker” side of the Potter books and movies.

Food and drink outlets will include an ice cream parlour and the Leaky Cauldron pub.

Guests holding two-park tickets will be able to travel between the new Diagon Alley-themed area to the existing Hogsmeade village in Universal’s Islands of Adventure park on the Hogwarts Express train.

Hogsmeade will also undergo some changes, with Honeydukes pub and restaurant being expanded.