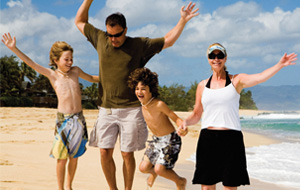 There is evidence that burgeoning  confidence in the economy is spurring holiday bookings. Ian Taylor reports

The UK economy grew at its fastest rate in four years in the first three months of 2014, confirming a fifth quarter of growth.

It’s quite a turnaround from a year ago when there were fears of a ‘triple-dip’ recession. The improvement is reflected in the latest Deloitte Consumer Tracker and overseas-holiday booking data from industry analyst GfK.

Let’s take the quarterly Consumer Tracker first. Published last week, this shows consumer confidence at its highest since Deloitte began the index in 2011.

In a summary, Deloitte notes: “All measures of confidence are up in Q1 2014 compared with the previous quarter and overall confidence is 11 points higher than in Q3 2011.

“Consumers feel more optimistic about their financial prospects. Confidence around the level of disposable income and level of debt improved significantly.”

The measures of disposable income and debt both increased by seven percentage points.

This is heartening, although the number of consumers who see things improving are outnumbered by those who don’t. What is important is the direction of the tracker, which is based on a survey of 3,000 UK adults.

An increase in discretionary spending is reflected in the fact that -12% spent more on restaurants, hotels and short breaks in the past three months compared with -17% a year ago, and -4% spent more on holidays against -8%.

In the words of Deloitte head of travel, hospitality and leisure Graham Pickett: “Lower inflation, easier access to credit, historically low interest rates and an improving job market have all helped consumers be more positive.”

When it comes to spending intentions for the current quarter (April to June), holiday spending is in positive territory for the first time since the tracker began: +1% compared with -7% a year ago – although spending on restaurants, hotels and short breaks remains negative at -11%.

Latest GfK booking figures broadly reflect this improving picture. In March, bookings for this summer were flat year on year, with revenues 2% down, but bookings for the season-to-date remain up 1% and family bookings up 4%.

All-inclusive bookings are doing even better, up 5% for the season, and accounted for 40% of all bookings in March.

GfK attributes the decline in average price largely to purchases of shorter-duration holidays, with seven-night breaks accounting for half of all passengers in March and two-week durations less than a quarter.

The top-five destinations for growth in March were all in Europe – Greece, Spain, France, Cyprus and Italy – with GfK suggesting shorter durations are leading consumers to prefer shorter flights.

Tellingly, GfK notes the largest falls in passenger numbers year on year were to the US, Egypt, China, Thailand and Australia.

Winter 2013-14 looks set to end 2% down on last year following an 11% decline in bookings year on year in March, but with average prices for the season up 2% driven by a 5% increase in the sale of package holidays and in line with operators having less to sell late.

Bookings for winter 2014-15 were up 3% in March, and package sales up 6% – the fifth month out of six that bookings for this season have been up year on year.