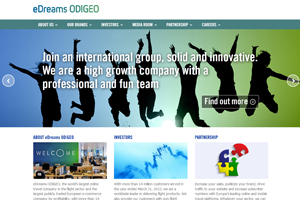 Disappointing results reported by Spanish OTA eDreams Odigeo are being seen as a setback for the Spanish economy.

In April the firm was the first to float on the Spanish Stock Exchange since the country’s economy started to emerge from the downturn.

The Financial Times reports today that at the time the IPO was hailed as a landmark, but following the publication of its annual results last week the mood has turned sour.

At the time of its IPO eDreams Odigeo shares stood at €10.25, but yesterday they were down to €5.92 after what the FT described as a ‘rout’.

Investors were said to have been disappointed by eDreams’ €21.1 million net loss, the same as last year, although the company highlighted a 12% increase in the value of bookings and adjusted earnings up 8%. to €118 million.

The FT said eDreams’ performance was embarrassing for the banks that arrange IPOs and that this could reduce the appetite for further flotations in Spain and other peripheral Eurozone countries.

So far this year there have been three other Spanish IPOs.