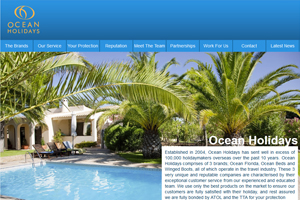 The directors of Como Street Travel have hailed a “phoenix from the flames” turnaround after completing the transfer of the firm’s business following an alleged £1.1 million fraud which was uncovered two years ago.

A statement of proposals from administrator Alexander Lawson Jacobs filed on Companies House last week said that a decision not to save the Como Street business as a going concern was taken due to the alleged fraud, which was covered by insurer AIG. Instead, the Como Street business has been transferred to another company owned by the shareholders, Ocean Holidays.

The alleged fraud had led to a £1 million deficit in Como Street’s Travel Trust Association trust account, and Ocean Holidays’ four directors have worked with the TTA, the CAA, AIG and Natwest on the process which led to its business being transferred.

The deficit came to light during a finanicial review around the time of the unexpected departure of Como Street general manager and shareholder Gary Smith in October 2012. Smith left the company due to disagreements with other shareholders.

Hastings, said: “At the end of 2012 we were going through a restructuring due to financial issues and that has now crystalised. It has taken a while to get there but it happened last week.

“There was an alleged fraud, investigations into which are ongoing, and we cannot comment further on that. A senior partner walked out and the four of us in the management team took control of the business.

“We have been very successful in turning the business around, this is a real phoenix from the flames story.”

In the aftermath of the problems discovered in 2012, Como Street was forced to sell its beatthebrochure.com brand which represented 50% of its revenues. Ox said it had now made up that shortfall and will this year turn over £30 million.

It also had to make 20 staff redundant, many of whom Ocean Holidays has taken back on as it has grown over the last two years. In total is has recruited 40 people in that time, said Hastings.

A statement from TTA parent, The Travel Network Group, said: “A requirement of the restructure was that all the shareholding be held equally by Daniel Ox, David Ox, George Hastings and Harry Hastings within Ocean Holidays Ltd as these were the main drivers of the business and were not suitably incentivised.

“This was done with the full knowledge and acquiescence of the TTA, CAA and the Como Street Travel majority shareholder John Ox.”

Hastings added: “Businesses that have unexpected events or change forced upon them are in the best position to quickly become stronger and leaner.

“This has clearly been challenging for us, however we have embraced our restructure and are excited for the future of Ocean Holidays with material organic growth in revenue forecast, achieved in a carefully planned and monitored five year plan.

“Ocean Holidays is now one of the largest independent Florida and US specialists in the UK and our controlled growth is taking place with enhanced senior staff recruited and being recruited at our new Kissimmee offices.”

Gary Lewis, group managing director of The Travel Network Group, added: “This is a classic case of how the TTA works with its members when they encounter challenges.

“With 100% financial protection to our business partners and consumers this business has overcome the difficulties it faced two years ago and is now going from strength to strength. Ocean Holidays is today trading as a TTA and Atol member.

“Since the restructuring took place two years ago, Ocean Holidays has emerged an even stronger more confident business with a great customer proposition and robust management team.”