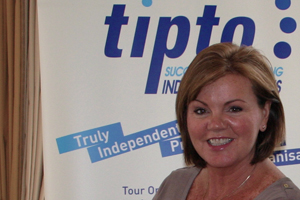 As Tipto enters its 16th year and welcomes seven new members, chairman Zena Calderbank tells Juliet Dennis why she is confident about the organisation’s future

The Truly Independent Professional Travel Organisation is upping its game.

Chairman Zena Calderbank is to stay on for a further year – her third – and plans to devote more time to the organisation following her decision to take a year out of her career this autumn to spend time with her family.

Calderbank, who officially leaves Hoseasons, where she is head of sales, at the end of October, said: “I’ve loved being chairman of Tipto and I believe with more commitment we can do more.”

The move has required Tipto to consult its lawyers to change its constitution as Calderbank will no longer be working for one of the organisation’s members.

A shake-up of the organisation has also seen the creation of an executive team to support Calderbank, instead of one vice-chairman. This comprises Ashley Dellow, head of retail sales, Leger Holidays; Richard Forde, agency sales manager, Newmarket Holidays; and Claire Dutton, key account manager, SuperBreak.

Calderbank said: “The new  setup will be more flexible as  it is difficult for people to devote the time needed for the vice‑chairman role.”

The membership is also changing for the first time in two years.

As the non-profit-making marketing organisation enters its 16th year, seven new members have signed up – including three cruise lines. This brings membership to 13 suppliers; last year there were 14.

Iain Baillie, head of sales at Carnival Cruise Lines, hopes Tipto will enable it to form new agent partnerships as well as “further demonstrate” its commitment to the UK trade.

All Leisure Group and Great Rail Journeys are among those members to have left.

“Our aim was to be in front of as many independent agents as possible as we built agent awareness of the brand with the small sales team we had,” he said.

“Tipto gave us that platform in a fun and interactive way and I do not feel we could have got to so many agents without its successful format.”

Calderbank added: “It’s always sad to see operators leave but it’s a great opportunity for new ones to come in and it’s a very exciting story looking ahead.”

She believes the new line-up of members signals a new era with a fresh outlook – and an opportunity to attract other agents to take part in Tipto events and training.

“The new operators will give us a fresh Tipto because last year and the year before we didn’t have any change (in membership).The cruise lines will also give us a fresh appeal to more cruise agents,” she said.

In the past 12 months, Tipto has held 28 roadshows for the trade nationwide, three of which were set up for specific agency groups and their staff only.

In total, 824 of the 1,200 who attended were new to Tipto,  which Calderbank described as “quite an achievement”.

Calderbank puts this down to the fact Tipto is now 15 years old, has established a solid reputation in the trade and offers roadshows that are managed by experienced marketing organisation The Network.

“We are now seeing a lot of homeworkers coming to the roadshows as well as more online and call centre agents because we have now got the confidence of their head offices,” said Calderbank.

She added: “There are 5,666 agents registered on the Tipto website, who regularly visit the site. These are agents we regularly engage with, who are looking at the new deals, window posters and marketing. We are also seeing much bigger hits on the website after roadshows.”

Tipto already has 24 roadshows planned for the next 12 months, while other events such as the afternoon tea and the networking day at the races are also likely to be repeated.

Calderbank plans to brainstorm ideas with members, which could establish new events, or changes to how Tipto is run.

“We will have a ‘think tank’ before the end of September  and take on some fresh ideas,”  she added.